After hours of hacking, cutting and exhausting work with a saw, I salvaged an AH-1W Cobra sprue for the upper rotor-shaft and turbine housing to add it to my Venom. Slowly things come into place and the whole chopper starts to look like an UH-1Y...
Some green stuff was added to shape transitions between panels that I couldn't close with anything but putty. It has to dry now for at least 24 hours until work can continue (which means even more fine putty over the rather rough green stuff ;-) ).
Eingestellt von Chris M. aka "Sgt. Scream" um 18:30 1 comment:

FoF "Grundausbildung". A little gift to my fellow German gamers.

I've been asked by a couple of users of German wargaming-related forums I frequently browse through, if I could do some example of Force On Force gameplay in German.
After I asked Shawn at AAG for permission (which I received), I spent the whole day with translating examples that Shawn himself had created. He used drawn maps to give gamers a better understanding of what was described in the text. I went for a more appealing approach and set up a gaming table and brought my miniatures to get some exciting pictures taken.

Here are a couple of the pics I used as an example: 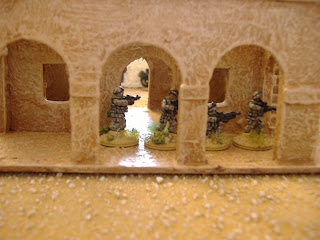 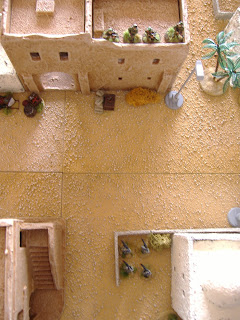 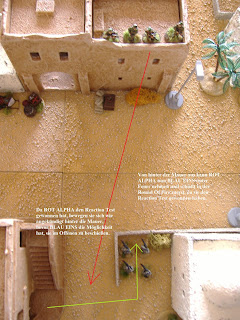 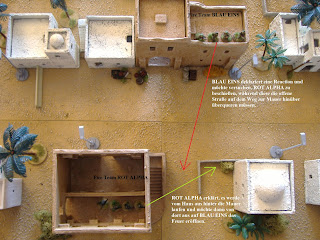 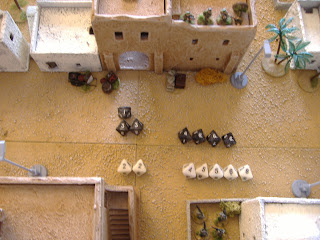 The German version can be found here

Ambush Alley Games recently has created a Wiki page that does include those example in their original English version. I do recommend to save that page in your favourites. There is more and more of free stuff for FoF gamers available and you'll always will find it there!
Eingestellt von Chris M. aka "Sgt. Scream" um 17:08 1 comment:

Work has continued on my UH-1Y conversion. I have added the turned exhaust ports and the crew, used lots of green stuff to cover up all the cutting that was done to the fuselage to add the resin part etc. It is still a long way until I can add primer. There is plenty of detail still missing, but it already comes in to shape.