I started working on my second Marine Support Squad. This time with M90 Miniguns. The bodies are from North Star LLC's range of figures, the Miniguns (modified) from Warlord Games' limited run "Terminator Genisys Resistance Command Squad" box made from resin. 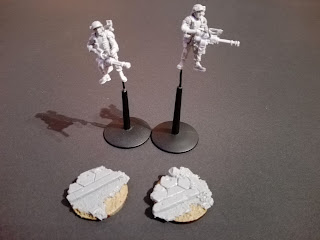 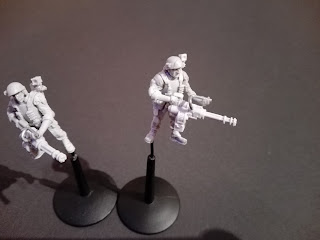 Thanks to a new lady working for Prodos (Archon, or whatever they call themselves now), I finally got the last missing items sent to me. Izabela made it finally possible to bring this "adventure" to a positive end.

Since she told me the "alternative Heads & Weapons" are never going to be made, I would have been left with a total of £5 worth of my Kickstarter pledge that just won't get fulfilled at all. Now, I don't think so, Prodos!

Contacting her turned out to be the by far most positive moment in my history of dealing with that company. Not only did I receive a reply to my email in less then 10 minutes after sending it - no, she also directly suggested ideas on how we can resolve the problem. I was going to buy from their webstore (that never created a problem, period!) again, since I needed some more things for all three factions. She said she would without further delay put into that parcel an alternative item worth £5. I decided to pick some more of the fancy dice with Alien symbols from the first edition.

Two days later I got a tracking number from both, the webstore's email AND from Izabela herself. She said the parcel was on its way and that I hopefully am happy with the freebies. Wait - freebies? She offered help on any further questions or querries I should ever have and wished me a good day.

Today the parcel arrived (two days en route from Poland to Germany). I got all I ordered plus my free exchange item (dice set) and my "freebies" turned out to be a full set of cards in German language for AVP 2.0 to replace the ones I got in the kickstarter PLUS some for the newly arrived items.

Years after the initial KS campaign I finally can close this topic for good and concentrate on the enjoyable part of the hobby: assembling and painting and gaming!

By the way, on a sidenote: the apology from Michal that I had in written in my second parcel last year contained a personal voucher code that offered -25% off ANY item purchased in their webstore. It still worked this year since I never used it. So this last shipment was really cheap for what I got:

Nothing special today, but there are 10 more Warriors joining the hive :-) ... Cause, you can't have enough of them. 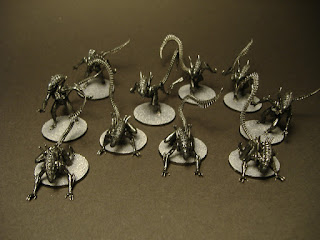 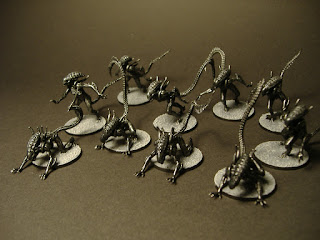 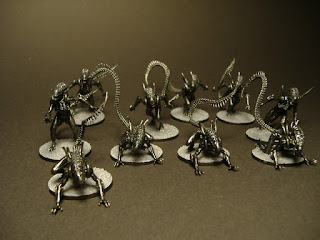 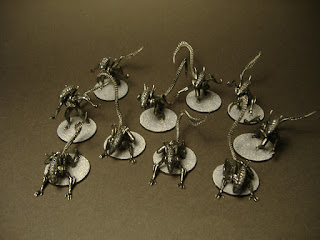