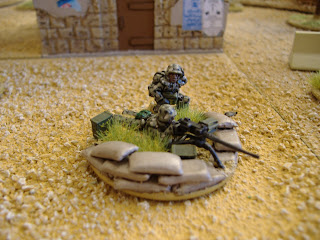 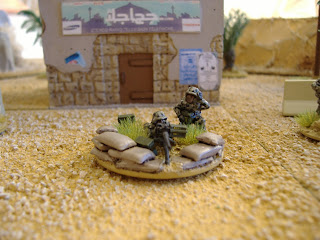 A HMG weapons team for the use in Ambush Alley or Force On Force. HMGs such as the .50cal depicted are normally only used on vehicles or static defences. For the latter I made this little base with a gunner and assist. gunner (RH Liberation Miniatures) - road block duty comes to mind. The gun itself is from elhiemfigures. The ammo boxes are resin ouf of a detailing set for an Abrams tank (Legend productions) while the sandbags are from Italeri's 1/72 scale battlefield accessoires.
Eingestellt von Chris M. aka "Sgt. Scream" um 14:24 2 comments: 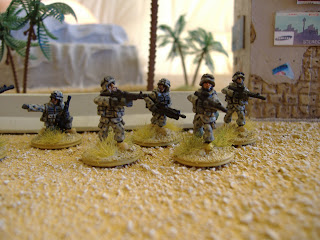 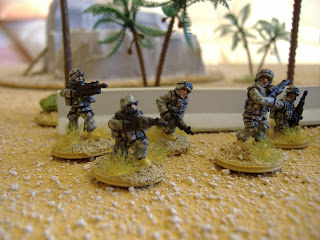 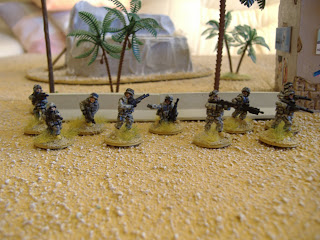 First squad of my 20mm US Army platoon. Containing leader and two fire teams. Each fire team has a gunner with a M249 SAW and another with M203 under-barrel grenade launcher. The rest carries M4 assault rifles (some with ACOG sights). All made by RH Liberation Miniatures. 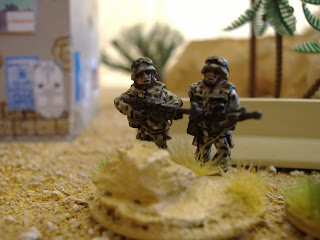 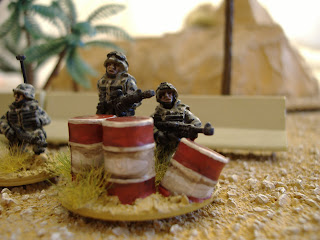 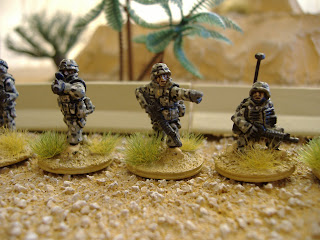 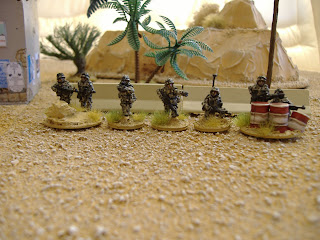 For my first task of the Guild Build 2010 I started my US Army platoon for Operation Iraqi Freedom (which will also be used on Afghanistan based scenarios) in 20mm. The miniatures shown are all made by Rolf from RH Liberation Miniatures. They represent the platoon HQ, containing my Officer-In-Command (in my case a 2nd Lieutenant), platoon sergeant (=Sergeant First Class), radio operator and two teams of M240 GPMG gunner + assist. gunner. 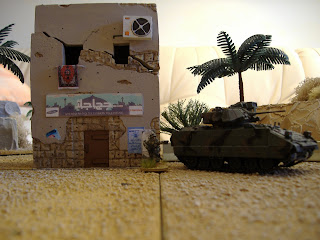 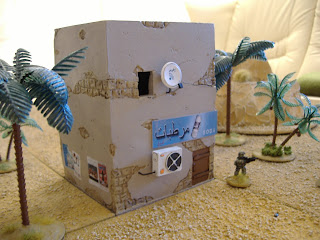 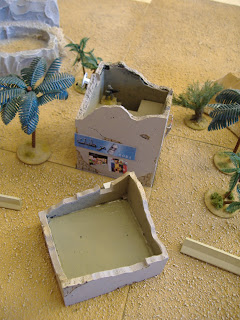 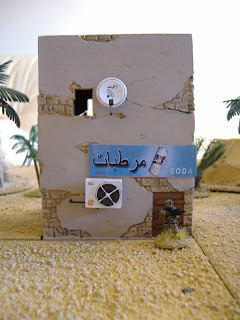 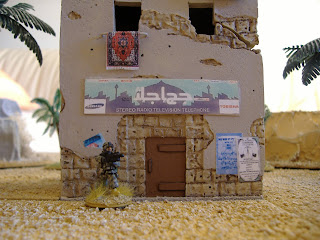 The building shown above comes from the 25mm range of pre-built/painted terrain of The Building Authority. A nice feature of these is that their rooftops can be removed to make the building look damaged or destroyed or simply to place miniatures within. I am no longer into 25mm gaming and hence the doors on this building were way to huge compared to a 2omm miniature. I used putty (Revell) and styrene sheet (1mm thick) to re-size the entrances. Once it was all dry I gave the whole house a new paintjob with colours that I found more fitting the middle east, for example the bricks are now looking more like they are made from mud. I decorated the whole thing with posters in Arab writing and added the shop signs over the doors. The air-conditioner-units are resin parts made by Shaun over at S&S Models. The satellite dish is self-made out of the bottom of plastic wrapping of fresh eggs that I bought in a supermarket (never throw away something you might need later ;-) ), its antenna is made from 1mm wire and plastic sprue left-overs. For comparison to the size of this building I placed an US Army soldier (RH Liberation) and a M2 Bradley (Dragon 1/72 scale) next to it. Comments are welcome as always - please stay with the English language when commenting.

Bringing the battlefield to life: Civilians - Afghani Goatherder and wife 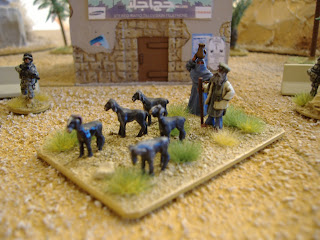 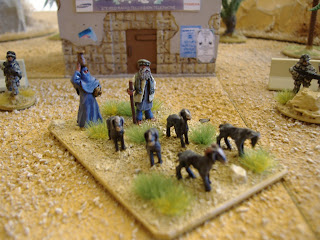 2010 kicks off with a brand new Build over at the Guild forum and for most of my individual tasks (that's how we named the single entries we have to do every two month) I will need civilians, too. Civilians add a lot to Ambush Alley or Force-On-Force games as the bases they are mounted on do block line of sight and you also have to roll a dice to see if your units might have caused civilian casualties if you fire weapons near by. The latter might transform a harmless civilian mob into a mob of frenzied civis grabing their AKs to get revenge. On top of that they just look gorgeous as they really bring a tabletop game to life. Most cities or settlements are never completely deserted when the fighting kicks off and with these lovely Britannia Miniatures the games will look even better. The miniatures above are all out of one set: Goat herder, wife and five goats. You can find those in Dave's 20mm Afghan range of miniatures.