The second one of my finished Ral Partha Europe Museum Scale Mechs is the "Mad Dog" Clan OmniMech.
It's going to reinforce the Clan Wolf Beta Galaxy with some long range firepower. This model is a re-based multi-part pewter miniature. 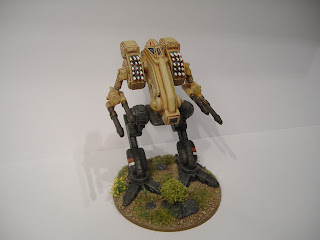 The Mad Dog is a heavy Clan OmniMech used for long-range indirect fire support. With hunched shoulders, a protruding head, and reverse-jointed legs, the Mad Dog resembles a vulture, so much so that it was codenamed Vulture and Hagetaka ("Vulture" in Japanese) by the Inner Sphere forces which first encountered it. The name also fits the battlefield role of the Mad Dog; the main role of the Mad Dog is to act as a support 'Mech, and it often holds a hill maintaining constant watch over the entire battlefield, like a vulture waiting for its prey. With its ample firepower and decent speed of 86.4 km/h, it makes a highly mobile firing platform, and as such has spread to near ubiquity among the forces deployed by the Clans﻿. 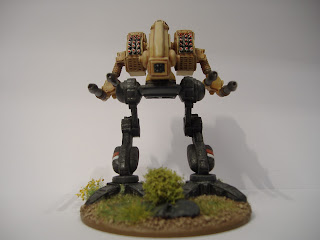 I really like the Museum Scale pewter kits as they have an awesome amount of detail and really nice panel lines. This kit was painted, using a combination of GW colours and oil paints. 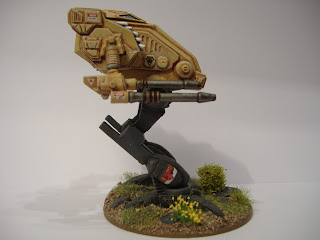 This side shot reveals detail of the arm mounted combo of Large and Medium Pulse Lasers. 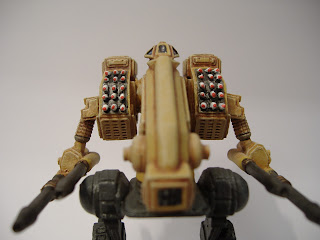 Mounted to the shoulder, left and right of the cockpit are the huge LRM-20 racks. 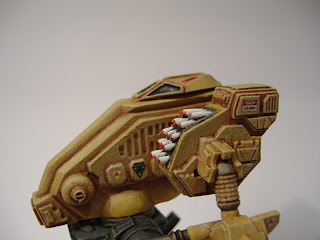 The Mech's pilot has a rather small cockpit, but mounted high on top of the torso it also provides a good view over the battlefield. 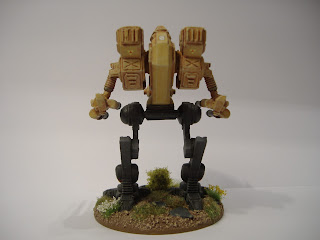