AVP: the girl's first game and new tiles for the board

I took the enlarged board game version to a friend's house yesterday since we had planned to have an evening of board gaming after dinner. After playing several rounds of another game, the girls decided they wanted to try Aliens. They already knew about my tabletop game related projects, so they were eager to find out why I am so excited about this game in particular. I had brought my larger tiles and my miniatures, gave the girls a short briefing about weapons, goals of the "Reactor Room" scenario and then had them decide who is going to control which character.
The two had split their forces into one of them controlling Dietrich, Apone, Hudson and Drake and the other Wierzbowski, Frost, Crowe, Hicks and Vasquez. They also set up the Marines in that order to take actions.

We played the basic scenario without ammo restrictions, without third-Alien- per-round spawns, but with the bonus bug rules. I have to say the two girls are die-hard Sci-Fi fans and have a lot of knowledge about the Alien universe - which is a rare thing to begin with (girls that know what's a Pulse Rifle?!). It turned out they were adopting to Aliens spawns immediately, knew when to put what weapon into use to kill which Alien to minimize Acid Spray casualties etc after two or three rounds!! Guess what these two managed: they rescued ALL (!!!) Marines in their first game of Aliens ever. Drake kicked three Xenomorph butts in Melee during that game, Dietrich got wounded in Close Combat by an Alien but  Apone kicked it off her and engulfed it in flames with his last action. Hicks had to rescue the incapacitated Wierzbowski and ran back to grab him, carried him back towards the exit, with Vasquez ripping everything apart that the Hive was sending at them.

The girls loved that game. I was told I need to bring back the board on Wednesday - they want to continue the campaign. I am a happy man. I have a gaming group of girls only that share men's hobbies. :-) :-) Now, they had Dietrich wounded and Wierzbowski Incapacitated - shouldn't be much of a hassle since their status turns better by one before the next mission.

This is where the latest project kicks in: in between "Reactor Room" and "Operations" the expanded director's cut of Aliens had the sentry guns shredding Alien waves in the hallways. Thanks to a guy I met in another forum (hi, Michael!), I got a map for exactly this scenario. You can see it below:

Furthermore, I also have the Expansion Pack map pack now. Enlarged version looks like this:

AVP: And I say, size matters

I started to paint up some scatter terrain pieces to block lines of sight and give some cover. There is more of these to come.

AVP: ..but who is laying all those eggs?

So, the next stuff on the to-do-list: paint up an APC, paint some more Alien eggs and some pieces of random terrain to block some lines of sight.

Starting with the charactes for my second squad, entirely based upon the cards available for the Colonial Marines faction in the old Harper Prism Collectible Card Game "Aliens Predator"

First one finshed: Pvt. Rogers, one of the smart-gunners

Today I revealed my "Aliens" board game conversion (into a tabletop game) to my best mates. I brought all miniatures, markers, quick reference sheets and stats cards, we set up our 4' by 4' table and played the first scenario, called "the reactor room".

The idea behind it is the movie scene in which the Marines lead by Gunnery Sergeant Apone are going into the reactor room. Since they are ordered by their commanding officer Gorman to remove the clips of their pulse rifles, most of the soldiers only bear pistols. Some of them brought flamethrowes, while Drake and Vasquez secretly kept their mighty smart guns operational.

About half way in they are suddenly attacked by xenomorphs and the mission turns into a run for their lives as they try to cross the table and reach the safety of the APC waiting there.

We played the scenario two times. First time I dropped yellow, red and blue markers that indicate totally random spawn points for up to two aliens per turn. We did not use ammo capacity rules, no friendly fire and we did not make use of the "bonus bug" rule as I had in mind. I was wary that the humans might not stand a chance. To keep things short: the Marines made it through with all of their comrades, only one of them being wounded.

That lead to the conclusion that I need to treat the blue spawn point markes like regular spawn points (so, that's three new aliens each turn), adding the "bonus bug" rule if you roll a 0 and re-roll any further zeros that might occur, giving you a minimum of 3 xenomorphs per turn or a maximum of 6.

We then used the ammo expenditure rules and "friendly fire" if LOS runs over the base of a friendly model. Now, that was more of a challenge. We had A LOT OF FUN. This was truly awesome.

Now here are some pics (no real Aliens terrain yet) and random thoughts on them:

AVP: a flyer base.. what might it be for? 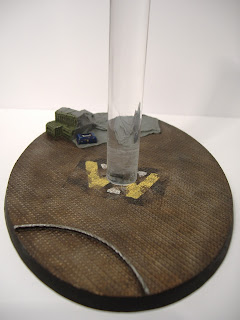 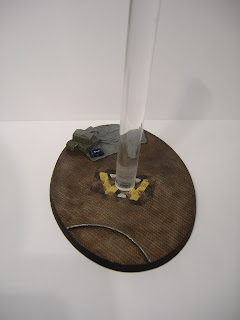 I just finished my rather large oval flyer base. Pretty crisp cast with no flash whatsoever. Clear rod to hold the flyer... what might it be? :-) And no- its not assembled yet. Wayland-Yutani emblem to fill the more or less empty base with something "Aliens" like.
Eingestellt von Chris M. aka "Sgt. Scream" um 09:19 No comments: