After a long time of waiting I got most of my kickstarter pledge in last year. I started with my resin figures of the so-called "Stalker" Alien - basicly the monster out of the Alien 3 movie. The paintjob is inspired by Agis' stunning work on his Alien figures, as seen HERE on his website
I also used his receipe and followed it completely. As some variety can never be wrong, I went with the brownish scheme for those models. Somehow I don't want to have an all "glossy black" Alien army. :-)
Just like Agis I don't wanted to use the lipped bases Prodos supplies the models with and used 2mm thick laser-cut plywood bases found cheaply on eBay instead. Thinking of LV-426 or other colonies the bases got a rocky grey colour pattern which really makes the models stand out. Gloss varnish spray from Revell and an extra thick coat of Citadel's 'Ard Coat for the heads finished off the overall effect I was looking for.
10 done, 10 more to do. 👌 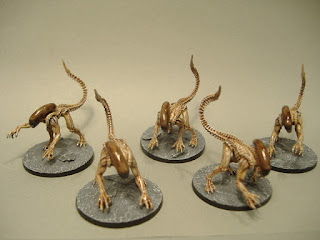 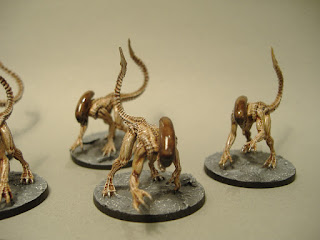 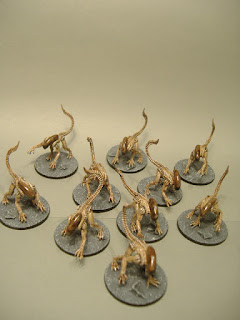