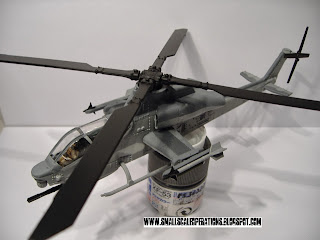 Next steps is painting details, weathering the fuselage, adding final payload and of course decals.

Since there were some tragic events taking place in my family, progress wasn't as much as I had expected to achieve over the weekend.
Anyway, the modelling always helped me to clear my head and so here are at least two pics of the little progress that I made:

Cockpit canopy added, base fuselage completed (I also completed the whole flyer base, but I won't show until the bird is done), ready for the paintjob... 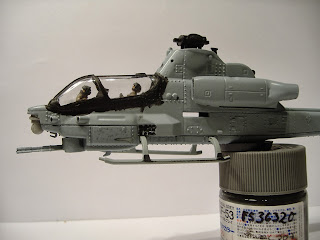 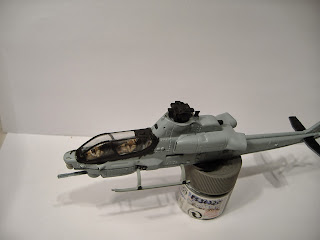 I have started on my AH-1Z Viper (Call-Sign "Starwolf 14") that is going to escort my Venom transport helicopter and give the Marines on the ground something to call if immediate CAS is needed :-)

Finished the cockpit and crew today and put it into the main fuselage. So far it looks really like nothing to be honest, but that was the case with my Venom as well :-D
I have also started its base. 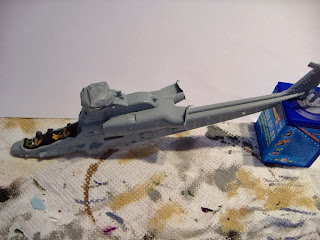 Today I have finished the base for my Huey conversion. I took an Italeri 1/72 scale Twin Huey and converted it into the latest UH-1Y "Venom" (Super Huey) by using parts of a Revell AH-1W Cobra, an Olimp Models Resin Whisky Cobra Upgrade Set and an Italeri Bell 412 as well as a Kitech AH-1Z Viper. The Low-Viz decals were part of the Olimp set.

The base itself is a flat oval one from Gripping Beast, with the clear plastic flyer rod coming from GW. I have used standard materiel: flock from Busch, Clump Foliage (summer) from Gale Force 9 and summer grass tufts from Noch. Colours used were black for primer, Tamiya Flat Earth followed by drybrushing with Vallejo Iraqi Sand.

There is a whole "work in progress" run of posts on my blog, just click the labels underneath this post to find related contributions and pictures from the build.

Anyway, on to some pictures of the finished Venom, call-sign "Star Force 21":

The weathering of my USMC UH-1Y "Venom", call-sign "Star Force 21" has been completed over the weekend.

The decals have been added, the details painted and then I went crazy with the oil paints. :-)

I let the pictures speak for themselves. I have to be honest, I am not completely satisfied with my painting skills. The colours are too thick in some places. Well, every project is helping to learn and improve though! 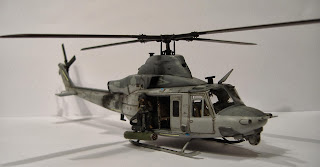 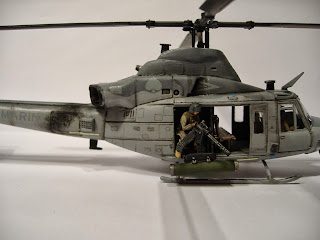 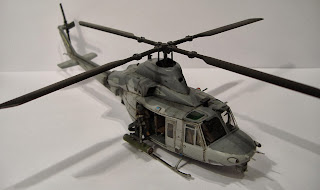 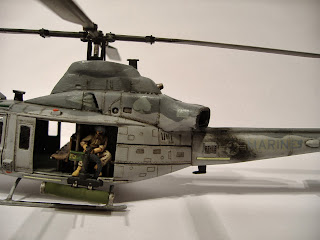 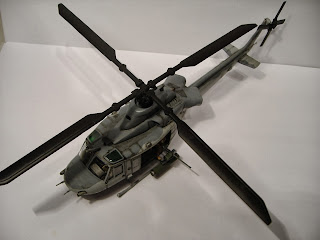 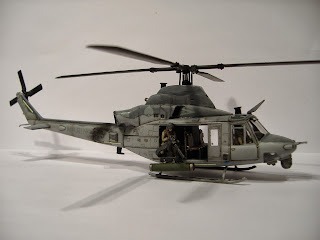 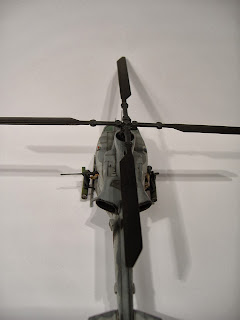 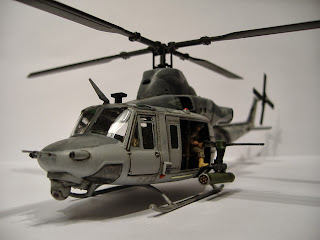 First layers of paint added - starts to look like a proper helicopter now. :-) 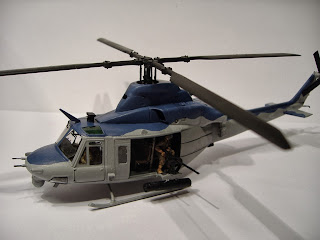 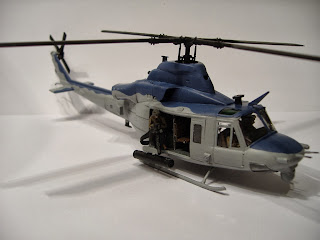 Lucky me - some of the original Leading Edge Games figures (20+ years old) salvaged from ebay for less than 30 Euro, unpainted in their original and undamaged box: 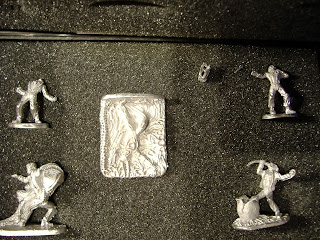 Got to find out how to rebase them without damaging the feet. :-/ 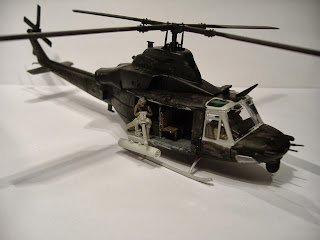 That leaves me with putting black primer on the last areas and then I can finally paint this baby!
Eingestellt von Chris M. aka "Sgt. Scream" um 15:44 6 comments:

After months of stompy robots and acid-blooded Aliens here is for a change a little bit of progress on my 1/72 scale UH-1Y Venom:

Hudson: "Man, its a shooting gallery down there!"

Wednesday evening the girls were on their next mission: the (fan made) "Sentry Gun" scenario.

I have set up the board, explained the rules and off we went with 15 rounds of shredding the Aliens to pieces. I don't know how they do it, probably with lots of luck rolling those dice, but I did not manage to get a single Xeno through the shooting alley. The kill count of the two girls in total after 15 rounds of heat management and aiming: 126 dead Xenos, not a single one made it alive to "Operations". oO

Although I could claim it only worked that well for them because I have used a roll of "0" as a zero instead of a ten. They both said it would not have made any difference of course *blink*

Some pics (taken by the girls themselves)

AVP: "B" gun is dry. Twenty on "A". Testing the Senty Gun Scenario.

Before I'll continue the campaign of Aliens with the girls, I wanted to try out Michael's Sentry Gun scenario. After all, I don't want to look like I don't know the rules when we will play tomorrow :-)

So, I've set up the board and took some (rather sloppy) pics on the way through the game.

The scenario is rather straight forward. Hicks orders Hudson and Vasquez to set up sentry guns in the tunnel leading to "Operations". Some of the barricades made by the colonists are still there, slowing down the Xenomorph's movement (they do not block LOS).

Basicly, you take control over four sentry guns A, B, C and D and fire them just like a regular Marine's action. The sentry guns cannot move, however, they can freely decide whether to "cool down" one point one the temperature level or spend the action for aiming. Each gun has three actions per round which are for free. The controlling player can decide to keep aiming and firing after those three free actions. Every such action raises the temperature by 1. The Sentry Guns can be kept firing by using additional actions, until they reach 10 on the heat scale which will lead to their shut-down. Only the free actions may be used to "cool down". Sentry Guns make use of the machine gun special rules.
The Aliens have to try to overcome the Sentry Guns and run towards the tunnel named "To Operations". Each bug doing so will be kept in a pool of additional Aliens available in "Operations / Air Ducts". The game lasts for 15 rounds.
Twenty Aliens are available in this scenario. For each tunnel you roll a D10 with the result showing the amount of Xenomorphs entering that hallway. Roll for the exact spawn location for every Alien Warrior.

Beginning with round two, you roll the D10 again for each of the two hallways, using the results to determine how many will spawn there. Should the results be higher than the currently available models (20 in total), you instead split them evenly for both hallways and in addition to that, all Aliens already on the board gain a bonus activation that they must spend to run closer to the guns.

This bonus action may not be used to overcome the guns. Aliens using bonus actions will stop in front of the Sentry Guns. This leads to extreme tension in this scenario!


I am looking forward to see how many Aliens the girls are going to shred and if any will be able to bypass the guns. They rescued all Marines in "The Reactor Room". It will be fun to watch if they can rescue Newt and Ripley through the "Air Ducts" scenario.
Eingestellt von Chris M. aka "Sgt. Scream" um 19:08 No comments: