Ta-daaa! An (minor) update: customs was friendly enough to finally let me have my miniatures. Heavy lance assembled and ready for painting. 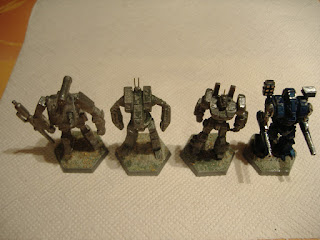 My original plan was to always do one Lance of Inner Sphere Mechs and one Star of Clan Mechs, alternating between the two factions. Thanks to German Customs (it seems) my arrival of Inner Sphere reinforcements has been delayed. In order not to waste time, I instead build up my next Star of Smoke Jaguar Mechs. Those are a mix of old Ral Partha sculpts, newer Iron Wind Metals Omni Mech parts (SRM 6s on the Man O' War, Pulse Laser muzzles on the Nobori-Nin) and a plastic figure from 2nd edition Citytech. There was some minor conversion work on the Nobori-Nin, to bring it to "B" configuration standards (see his arms in foreground). 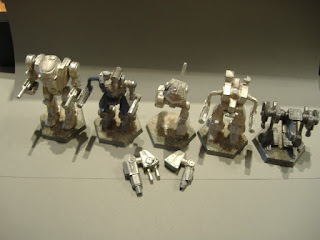 by the time of posting those are already primed and ready for painting.
Eingestellt von Chris M. aka "Sgt. Scream" um 11:45 No comments: