I traded Mech figures with a buddy of mine and received a Thunderbolt and a Scorpion in exchange for what I gave him. These are Dougram models in 1/144 scale, really nice kits all together. I still have 15 more of them to build, to include Griffins, Shadow Hawks, Wolverines and Battlemasters.

It's going to be a little while until these will see paint but I assembled them and put them onto bases already. Thunderbolt got a minor re-pose ("walking" and right arm in firing position), a new hand and I added the missing SRM-2 rack to the model. Scorpion is stock (out of box) but I had to create a special base due to its wide stance. I could have gone with a bigger base diameter but our group puts all Mech less than 60 tons on small diameter bases. 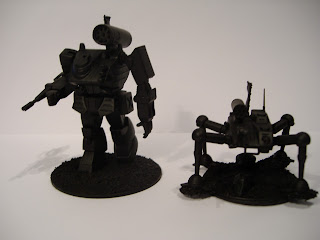 I went to my best mate today, setting up an 6' by 4' table with some rocks, hills and forrest and having a nice afternoon with stomping each other's Recon Lances into the ground.

So, on a not further described planet surface the recon lance of House Kurita's First Sword Of Light met with House Davion's 3rd Crucis Lancier's scout force in a battle that left only one Mech standing.

Since my internet and phone line broke down last Friday evening I had a little time (read: no distraction) and spent it on the painting table, cleaning and priming 10 more 40k Space Marines and paint up the above. Ok, the Mech really only has gotten a quick paintjob without to many details being available on the miniature to begin with - but I kind of like it anyways. Maybe because I am an Archer fan?!
Eingestellt von Chris M. aka "Sgt. Scream" um 19:22 No comments: