Young Tusk is the second of my Predator Youngbloods. Like his brother Eager Youth he just claimed his first trophy, lifting him into the caste of the true warriors of his clan.
I painted both the same way, symbolizing their bond as brothers. Since Youngbloods lack the experience of elite or elder Predators, they are allowed to hunt in packs of 2-3 warriors until they reach a certain reputation. I have plans to add at least two (maybe three) more Youngbloods to chose from for AVP miniature gameplay. After those its the heros next: elite and elder Yautja.
Eingestellt von Chris M. aka "Sgt. Scream" um 22:09 No comments:

Burke and Newt. Finally, all Aliens movie characters are done. Apart from Dropship and APC all human items for team 1 are finished with those two.
Burke (Woodbine Miniatures) is only in use when playing scenarios out of the movie, otherwise he's just another civilian to be rescued by the Marines. Same goes for Newt (Hasslefree Miniatures) who will be just a generic child to be rescued in most cases, but if I want to play the movie scenes I now at least own an appropriate figure.
Eingestellt von Chris M. aka "Sgt. Scream" um 21:56 3 comments:

So here it is now - my first ever painted Predator figure. I never had painted one before so this was quite challenging. There is so many pics and variations of the skin pattern around the net, that picking a suitable one wasn't that easy.
In the end I just painted away and added or washed over on the go.
Based upon Vallejo Khaki, that was highlighted with GW Kommando Khaki and finally GW Dheneb Stone, it was finished off by painting the sprinkles with GW Scorched Brown, before being washed over with heavily thinned Armypainter Soft Tone.
The mouth was highlighted with Vallejo Medium Flesh followed by GW Dwarf Flesh and finally GW Tentacle Pink. Teeth were done with GW Iyanden Dark Sun, Bleached Bone and finally Skull White. Same colours were picked for the nails on the fingers, which are almost claw-like.
The metal furfaces where basecoated in GW Tin Bitz before being highlighted with Revell Iron/Eisen and toned down with a wash of Armypainter Strong Tone.
All leather was done with Vallejo Saddle Brown and highlighted with GW Bestial Brown before receiving a wash with Armypainter Strong Tone.
The Xenomorph head (trophy) was painted Tamiya Flat Black, highlighted with GW Shadow Grey and its teeth with Boltgun Metal. I then coated it with the old GW Black Ink to give the upper part a shiny and glossy finish.
The spear was painted in Revell Iron/Eisen and Armypainter Weapon Bronze before being inked with Dark Tone.
The lettering on the cloaking device control pad was done in three steps: GW Crimson Gore, Blood Red and Fiery Orange.

I like how it turned out but I will replace the Khaki basecoat for the skin with something brighter on my next try.

Four of EM4 Miniatures' beautiful sentry guns. I didn't do anything to them, they were built out of the bag and placed upon Sulaco Series bases from Fenris Games. I tried to paint the lenses to reflect IR and ambient light sensors. Cute little things.

Not much to say about Ripley other than she's in a pissed off mood represented in that Woodbine Miniature. Its her just before she enters the Alien Hive on Acheron. The miniature actually shows all the gear Ripley took with her: Flamer, Rifle, Grenade spare ammo and the PDL she was using to locate Newt's whereabouts.
So who the hell is Campbell I hear you say?! Well, since I will need more than one squad of Marines I have to come up with another section that also needs to be lead by a Lieutenant. Campbell is the LT that was included in the 1997 AVP collectible card game. He and all of his Marines will be based upon those playcards. That will give me another set of 12 characters for the humans. 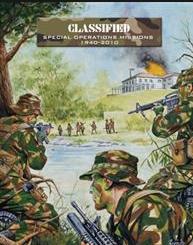 From covert actions against insurgent groups and daring sabotage missions to precision strikes against fortified positions and reconnaissance deep behind enemy lines, the special forces units deployed by many nations are the spearhead of modern combat operations. Classified, the latest companion volume for Force on Force, allows wargamers to recreate any and all of them. With detailed background information, extensive orders of battle for the world’s preeminent special forces units, and a range of scenarios, Classified gives Force on Force players a detailed and realistic experience of modern special operations missions across the globe.
"Classified Special Operations" is the latest release for Force On Force. It will also be available in print on February 19th, 2013.

You can find it in AAG's webstore or wait for the printed version that will also be available via amazon etc.