After way too much time since the last post here is the completed Crisis Suit Cadre: 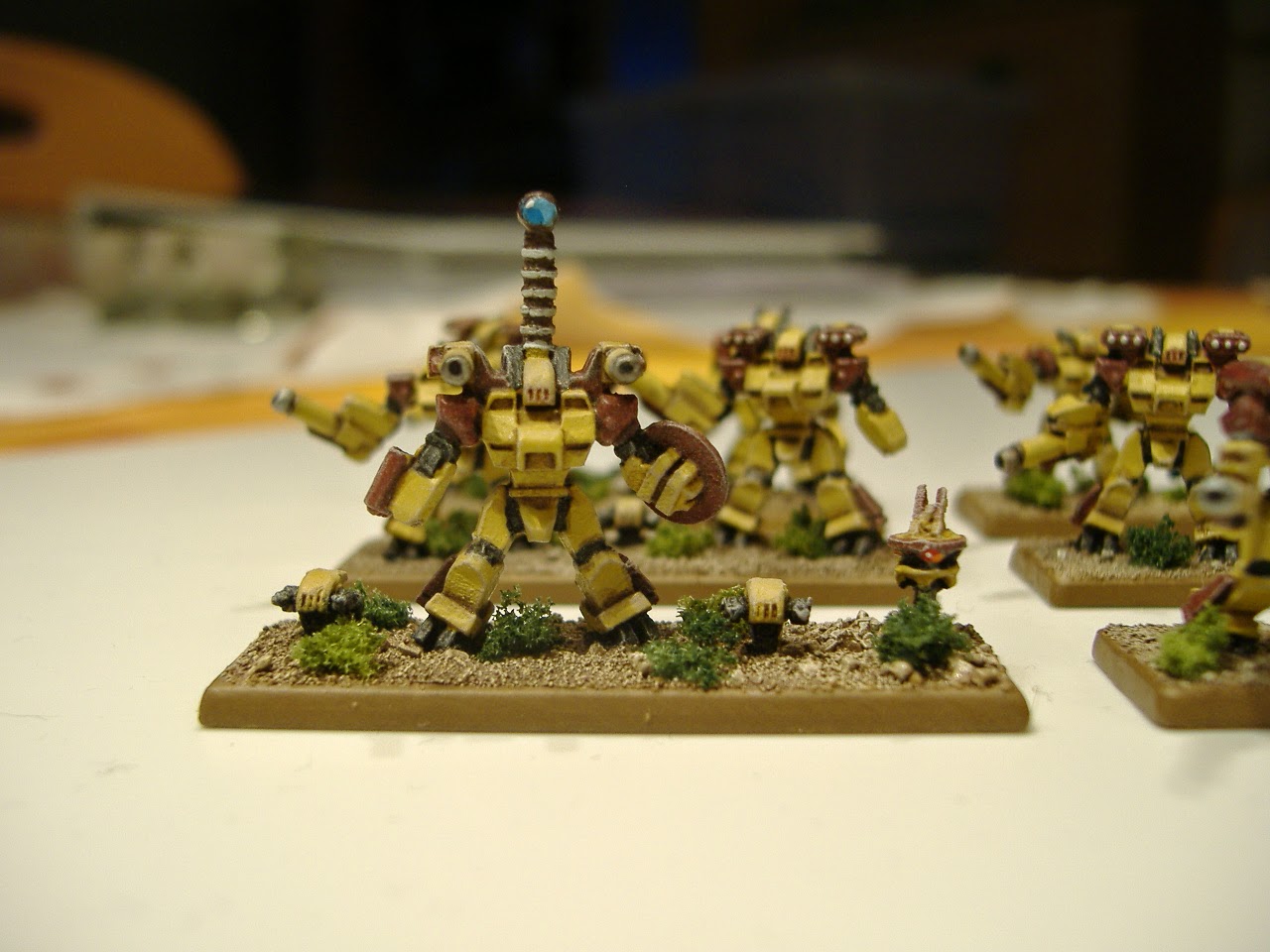 
Ok, taking the time that passed since my last post, others would by now probably have finshed the entire formation or more. :-)

But spare time to paint is something that I would really need more of. This is my first test piece of a unit of "Crisis" battle suits, again produced by Onslaught Miniatures.

After real life has taking its toll over the last couple of days, progress was rather small. Nonetheless, core formation #1 has been finished by now, with painting its transport tanks.

Again, these are models by Onslaught Miniatures which will "count as" Devilsfish transports.

So, here they are: my first ever painted 6mm miniatures. Six bases of Tau Firewarriors, using proxy models by Onlsaught Miniatures and a Forgeworld Ethereal (+drones) upgrade.

Their transport tanks are going to be next in line for painting.

The Air Caste is lending its support to my Firewarrior ground units:

More air units are going to be purchased soon, I just need to get paid for this month first ;-)
Eingestellt von Chris M. aka "Sgt. Scream" um 18:49 No comments:

A project of epic dimensions: TAU army in 6mm

It's more than 20 years since my mates and I got into the whole tabletop gaming hobby. We started with Warhammer 40,000 (which we still play today), got into Battletech, Necromunda, Blood Bowl, Force On Force, Modern Combat and many others. Most of them we still play from time to time.

The latest game we have decided to build forces for is Epic 40k. Although no longer produced and not supported by GW any longer, it has a huge and living web community that stepped up and took the place that GW left behind when they decided to drop all Specialist Games.

Finding miniatures also wasn't that hard since there is plenty of second hand stuff to be found and a growing amount of little companies that supply some really nice looking 6mm Sci-Fi stuff that can be used as a Epic "look-alike" model.

With that in mind I was aiming for a TAU army. What is shown on the pics is a mix of original Forgeworld Epic TAU miniatures and some Onslaught Miniatures "Okami Technocracy Combine" troops. They mix together quite well I'd say. 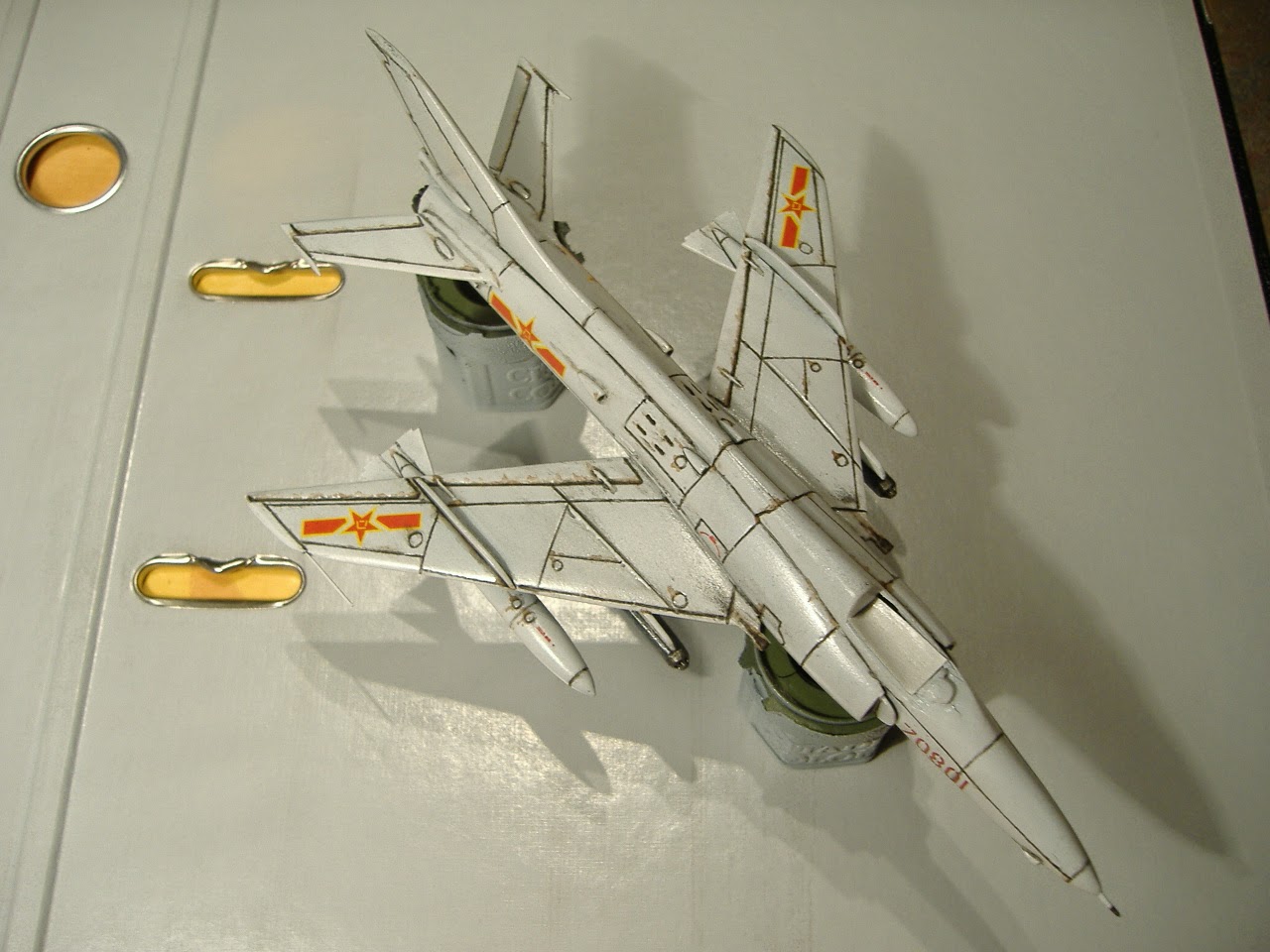 Today a considerable amount of time went into cleaning the panel lines' excess paint away. After I was done with this step, I added some weathering and dirt to the aircraft, using washes and Tamiya weathering set powders. I think I am going to leave the Fantan this way, finally adding pilot, canopy, payload and base with the next steps.
Eingestellt von Chris M. aka "Sgt. Scream" um 19:28 No comments: 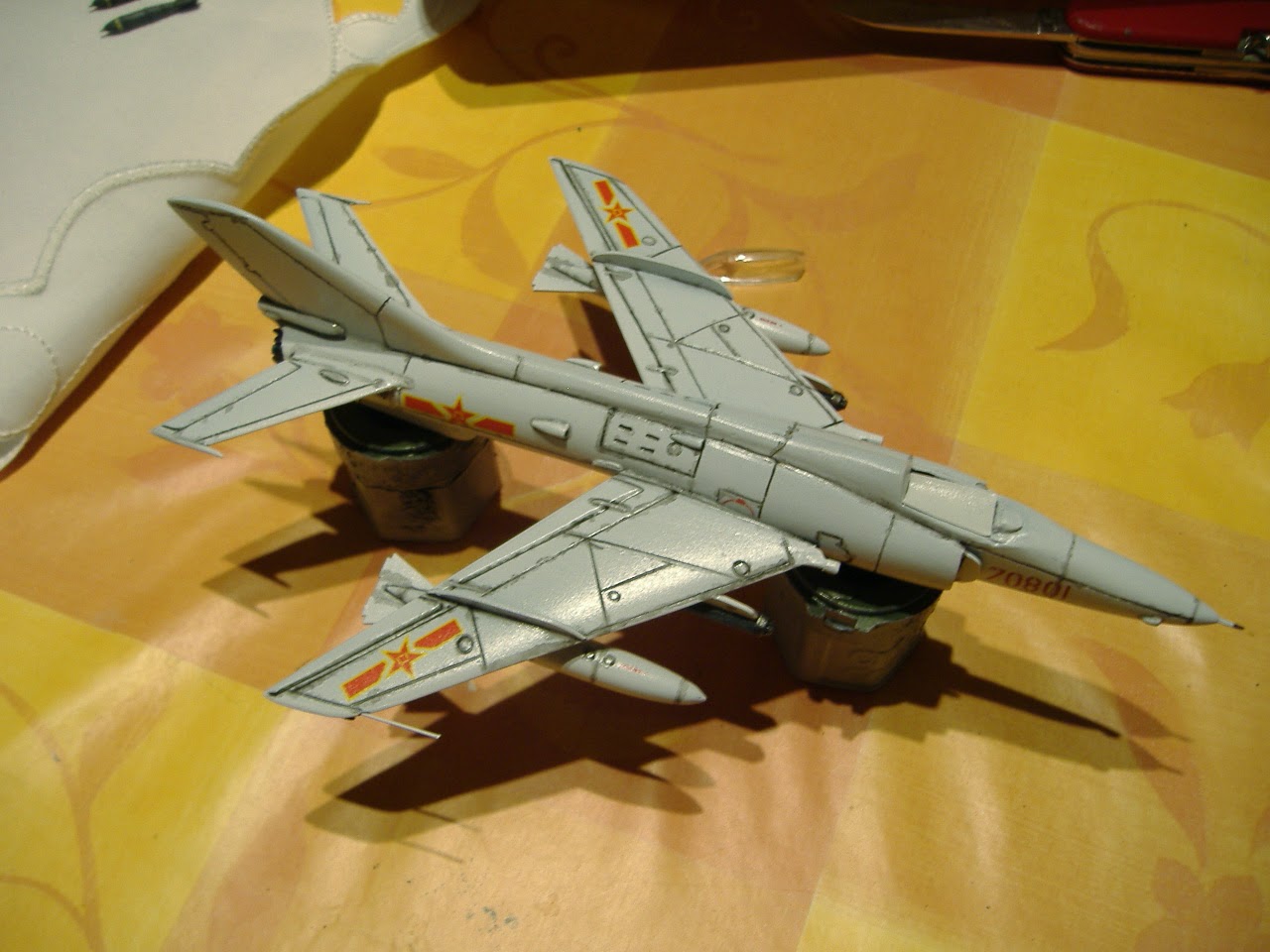 Today I've painted the panel lines. I used Revell's matt black enamel paint, thinned down with turpentine. This needs to dry until tomorrow evening and then I have to carefully clean any excess paint around the recesses. Stay tuned.

I have spent this afternoon with painting little details here and there, that I wanted to be finished before the gloss varnish layers are applied.

The decals have been taken from various Soviet aircraft and out of the vaccu-form kit itself. Surprisingly they went on quite easily although they were already pretty faded (probably very old). Good thing about faded colours is: it looks natural on an aircraft that is used by the Chinese navy.

The decals were applied using the Micro Set and Micro Sol solutions. I will let everything dry over night and apply the varnish tomorrow. That will allow weathering and pin (panel) wash with oil paints next week.

I am really excited how the kit turned out. I would have never imagined I am capable of building a vaccu-form model. But I can also tell you: it was probably the one and only I will ever assemble. ;-) 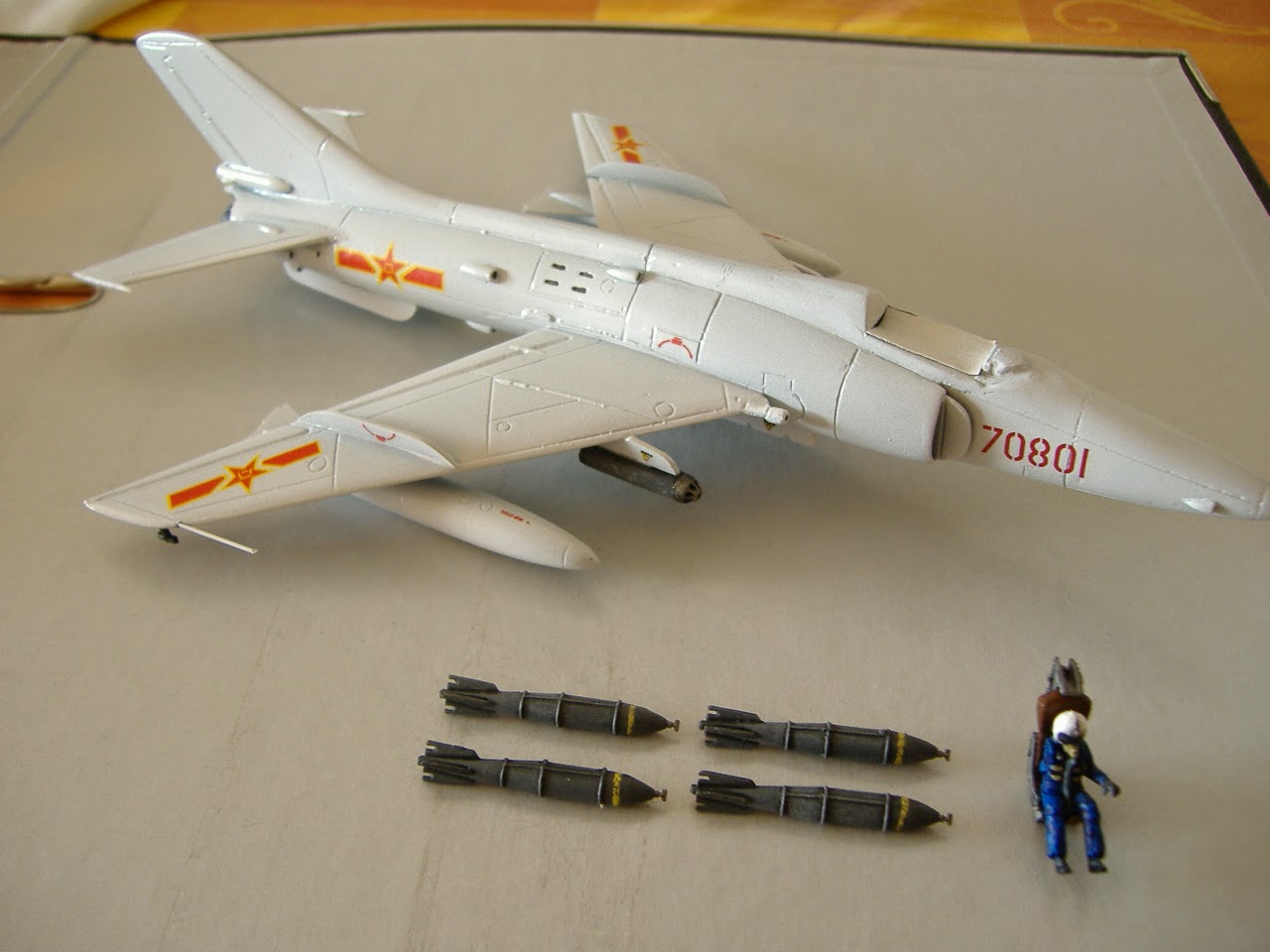 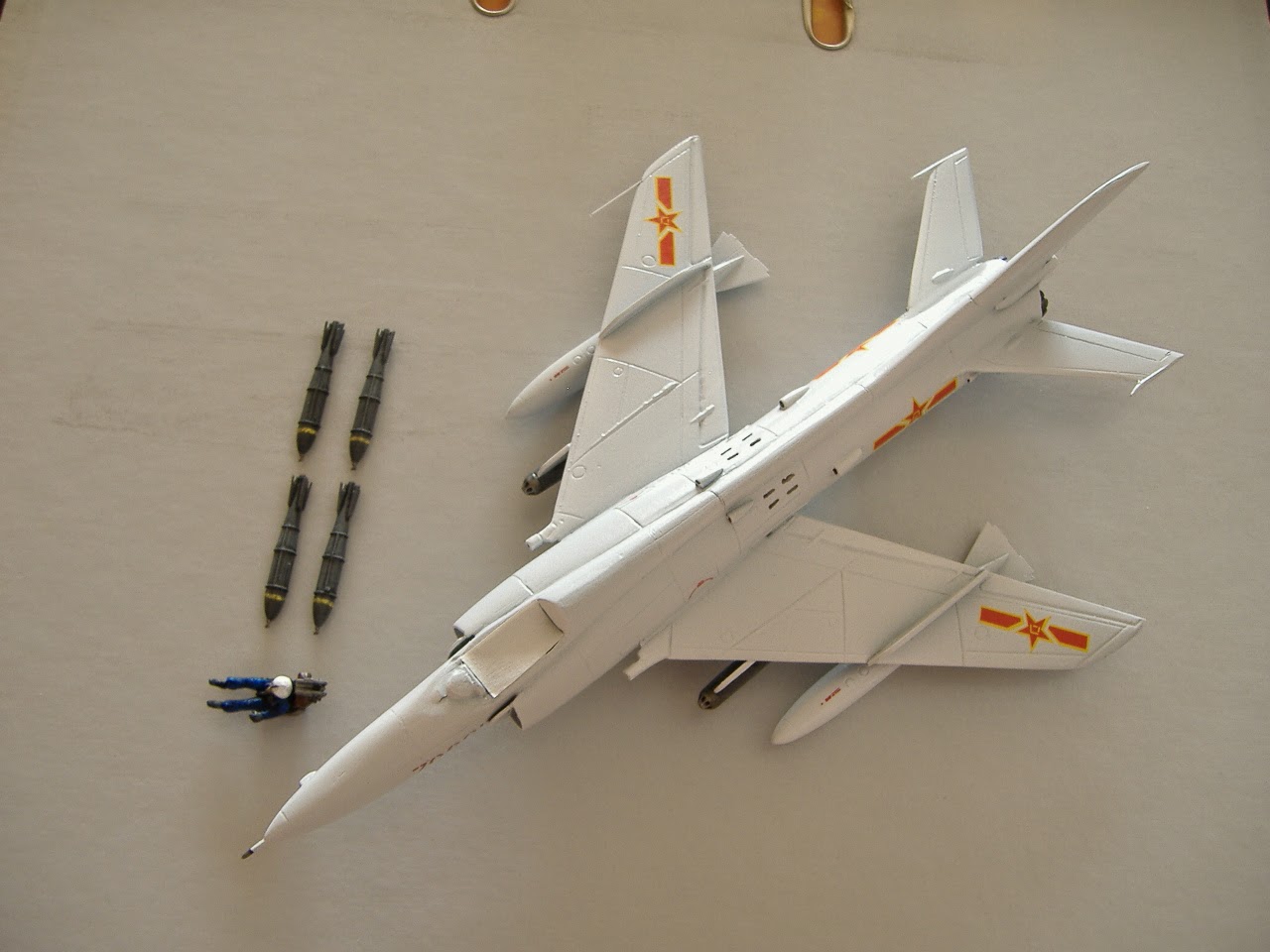 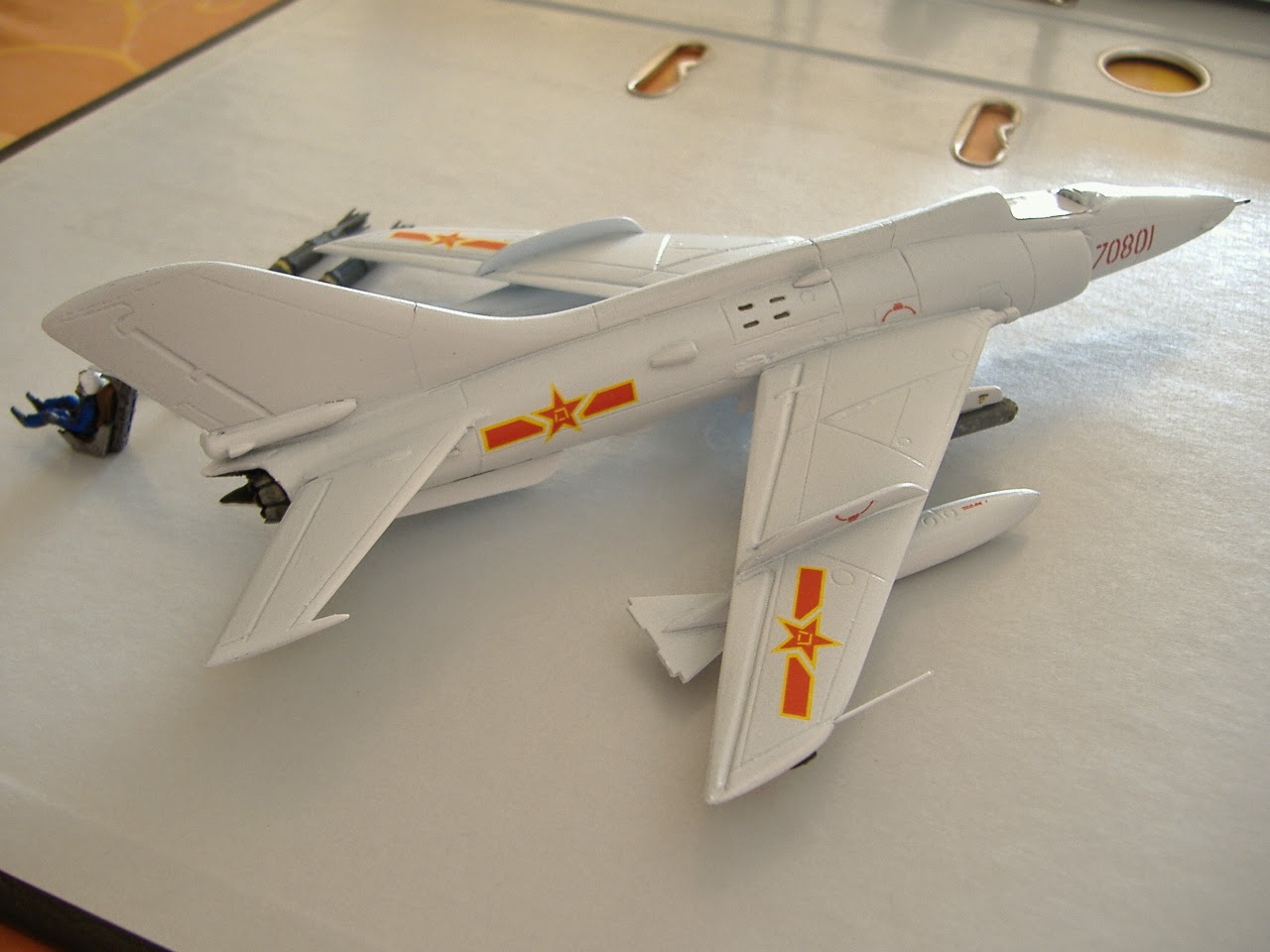 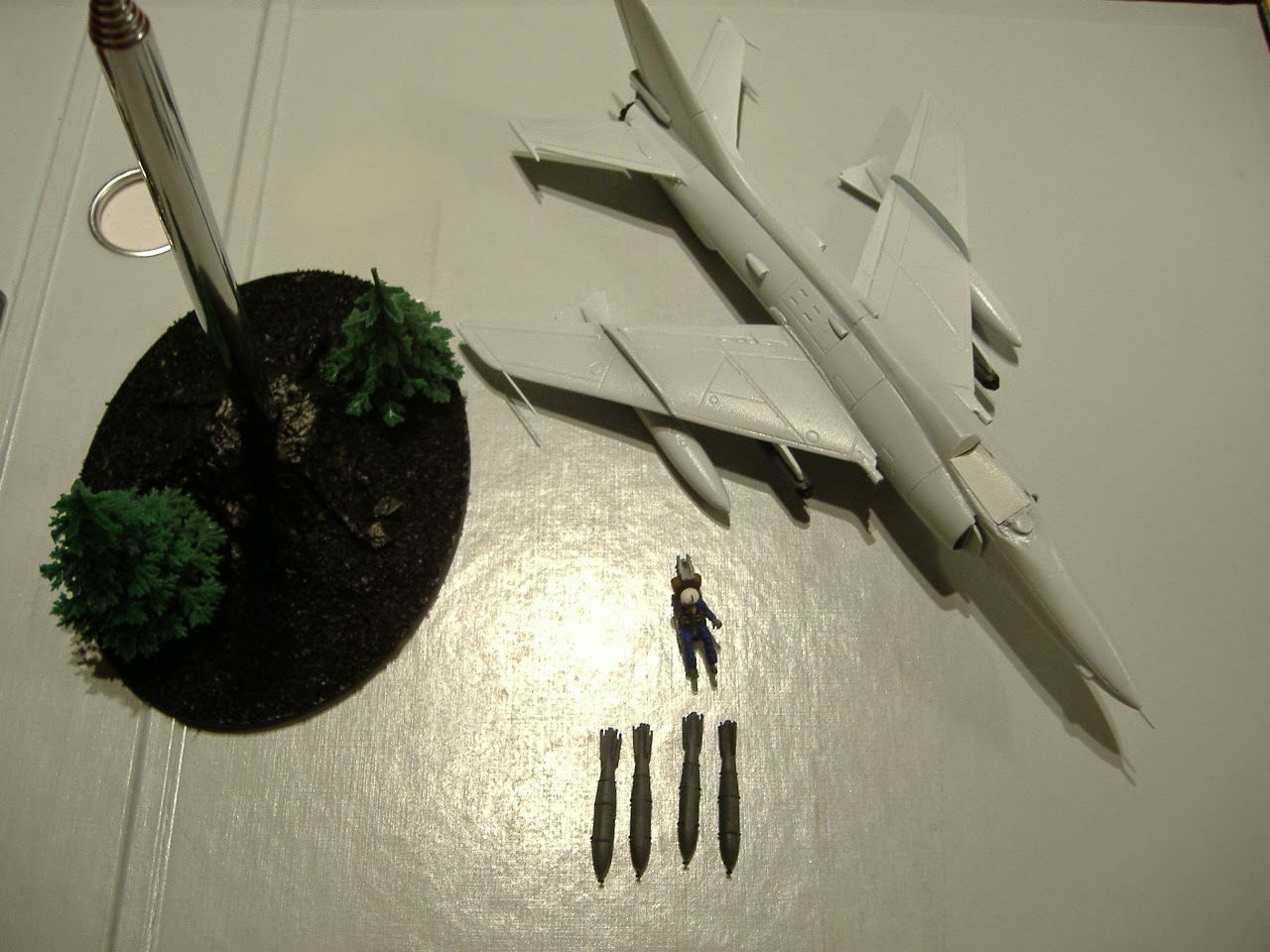 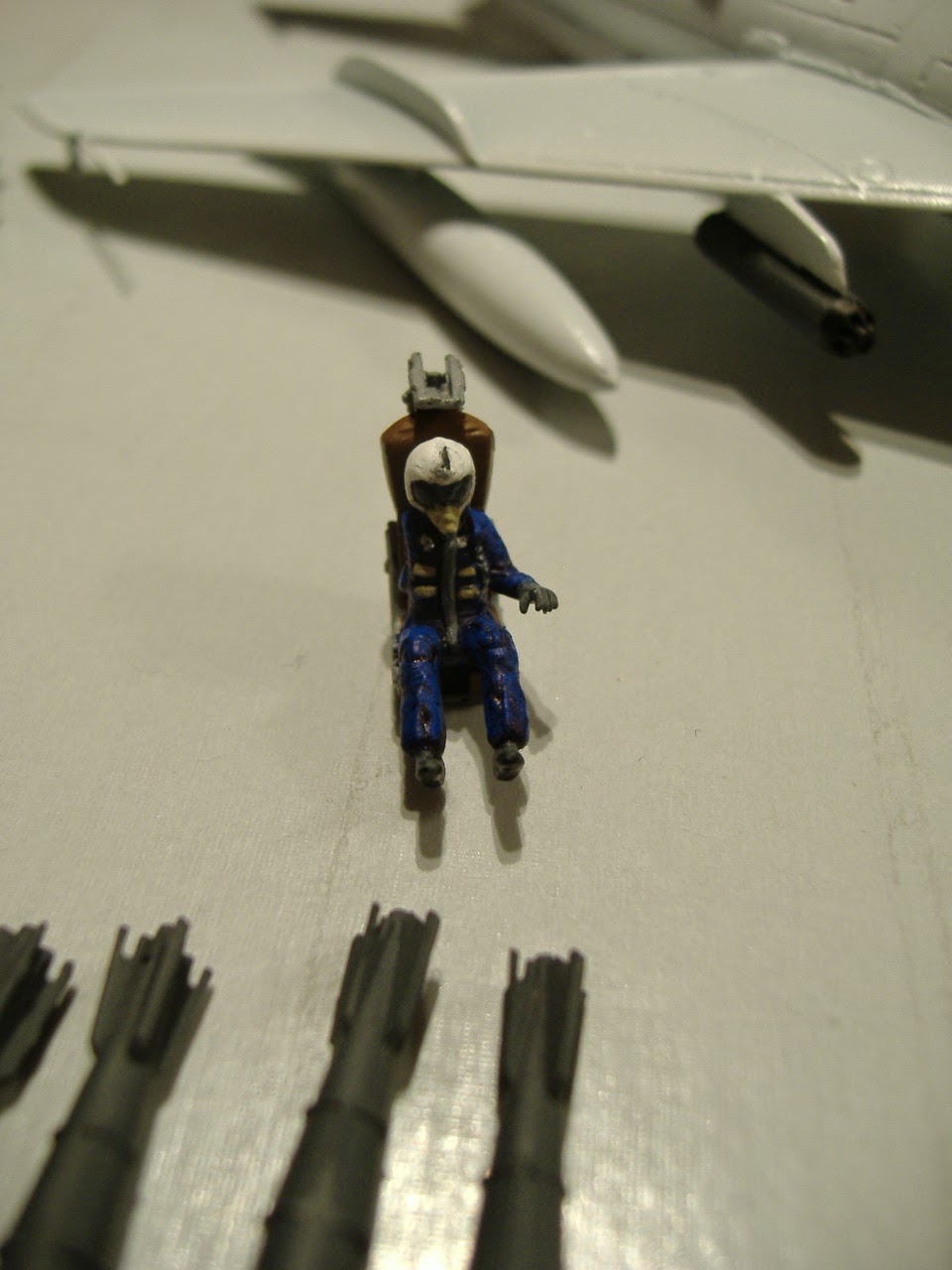 I have decided to give the Fantan a classic gloss white paintjob like its used with the PLA Navy air units. It just had the first layers painted on, so this is far from being finished of course. I painted the pilot (he's missing one arm, because otherwise I won't be able to fit the ejection seat into the cockpit - I'll glue it in place once he's in there).

Four FAB-250 low drag bombs that will go under the fuselage can be seen as well as a WIP of the Fantan's flight base.

This is what I am looking to achieve once completely painted: 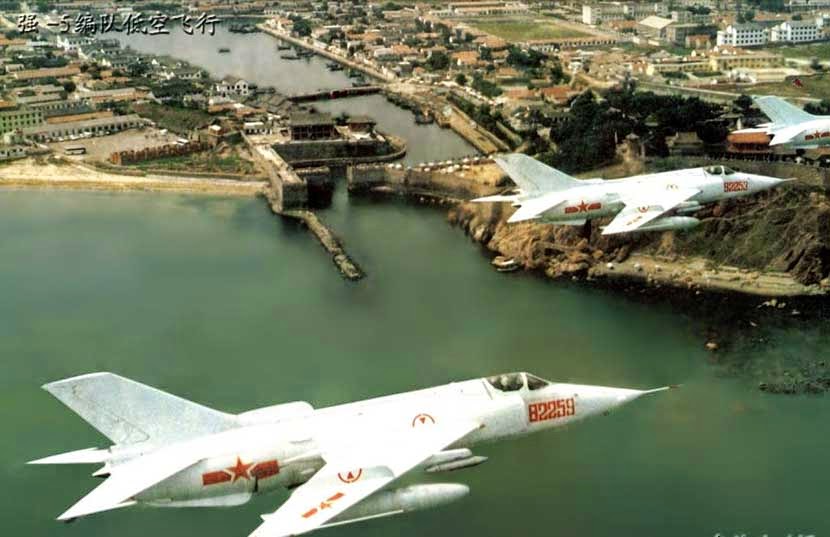 I have put primer on ;-) All coming together now. Barely visible that it was not an injection-mould kit. 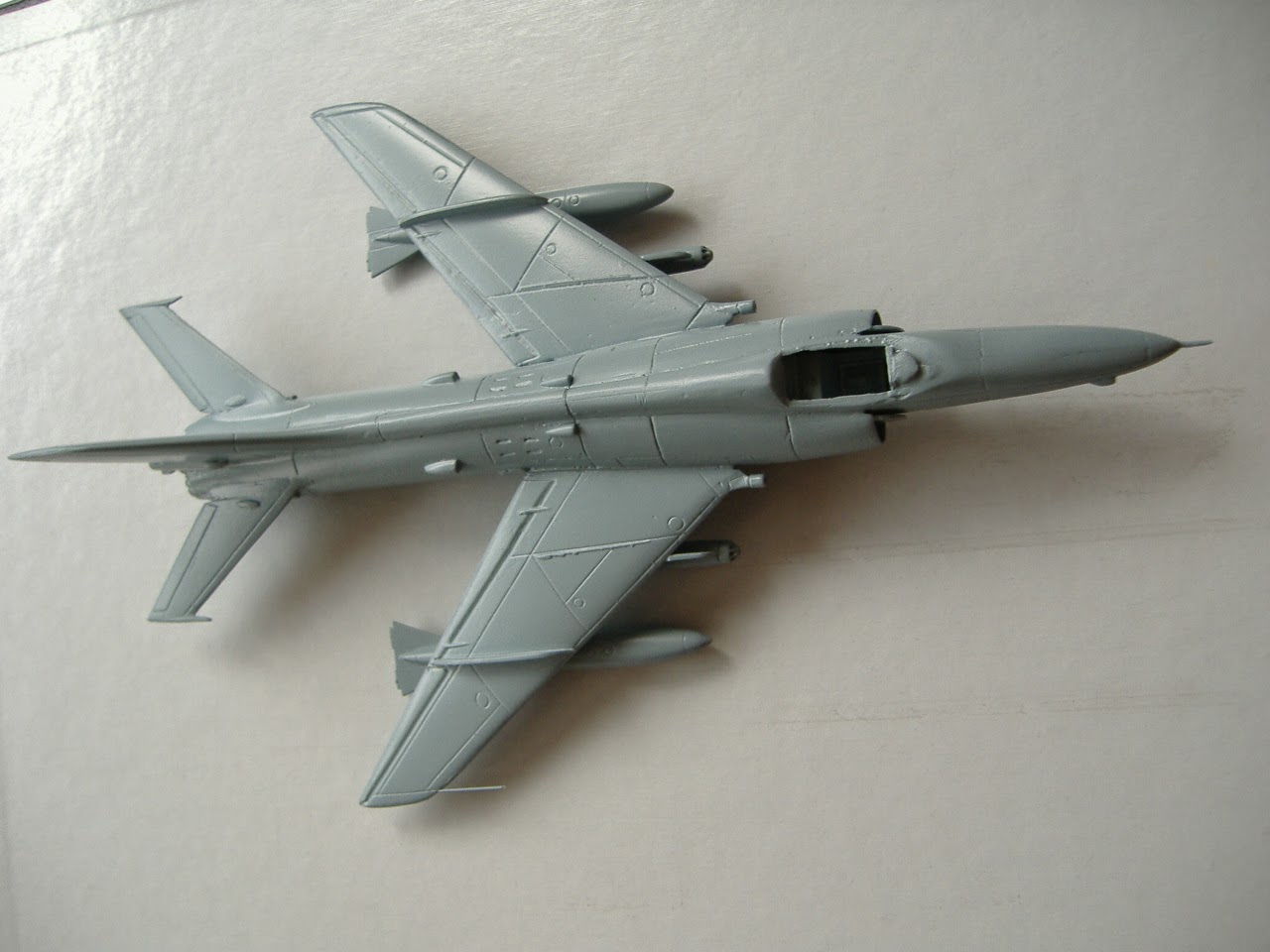 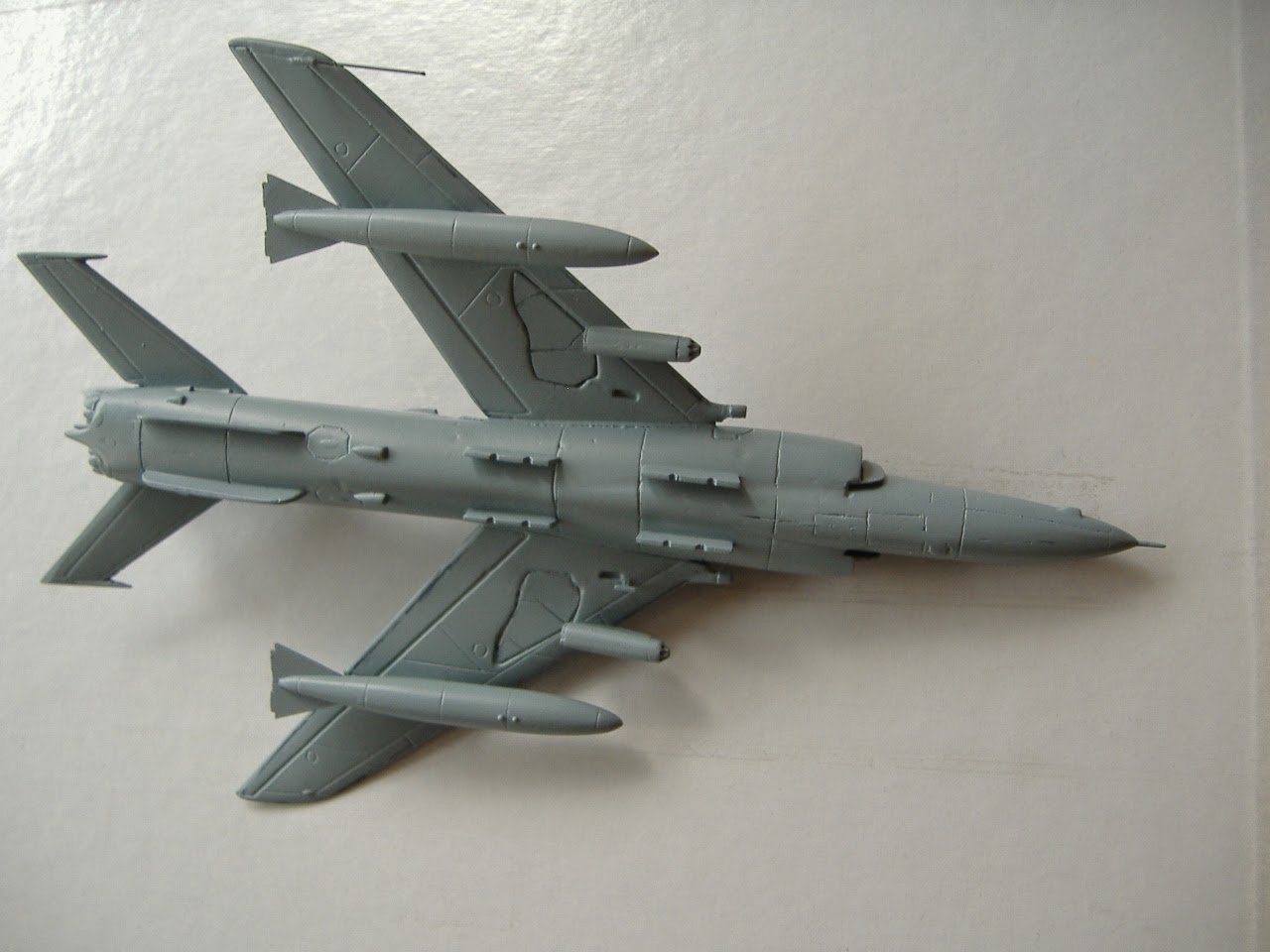 Another couple of hours went into the build and this is the current status: some more work with putty here and there and I think I really can go over with primer this weekend. *yeah!* 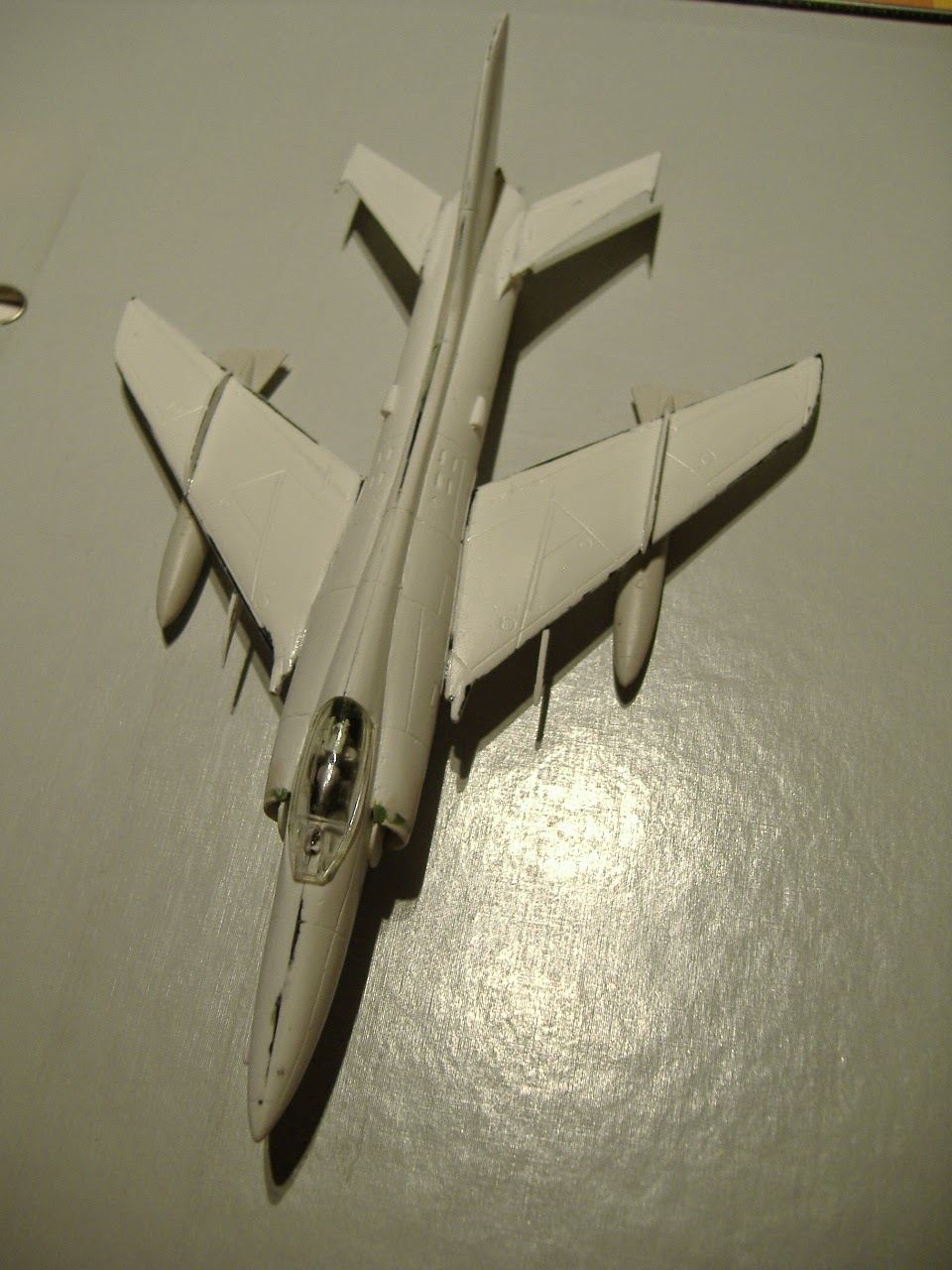 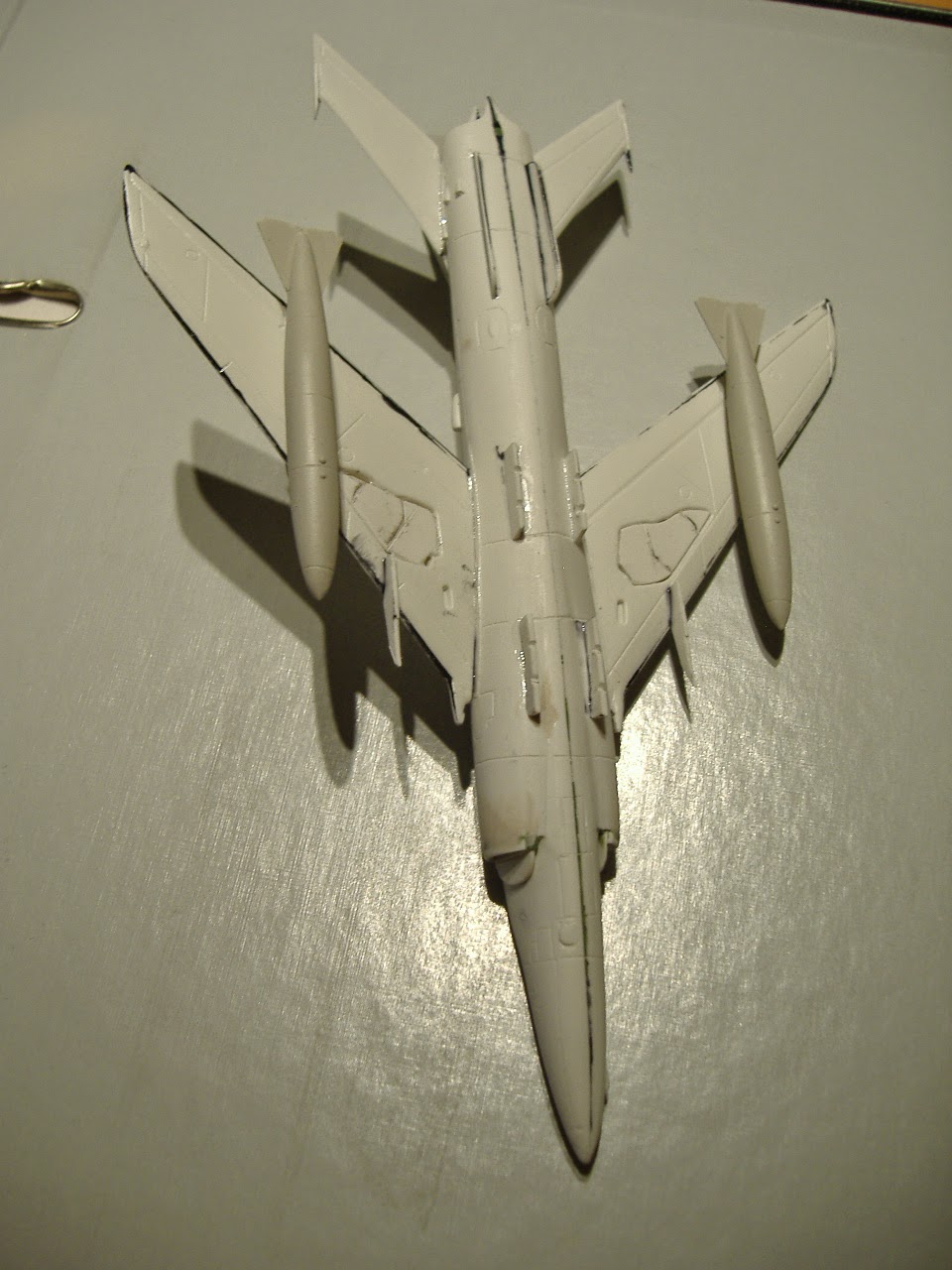 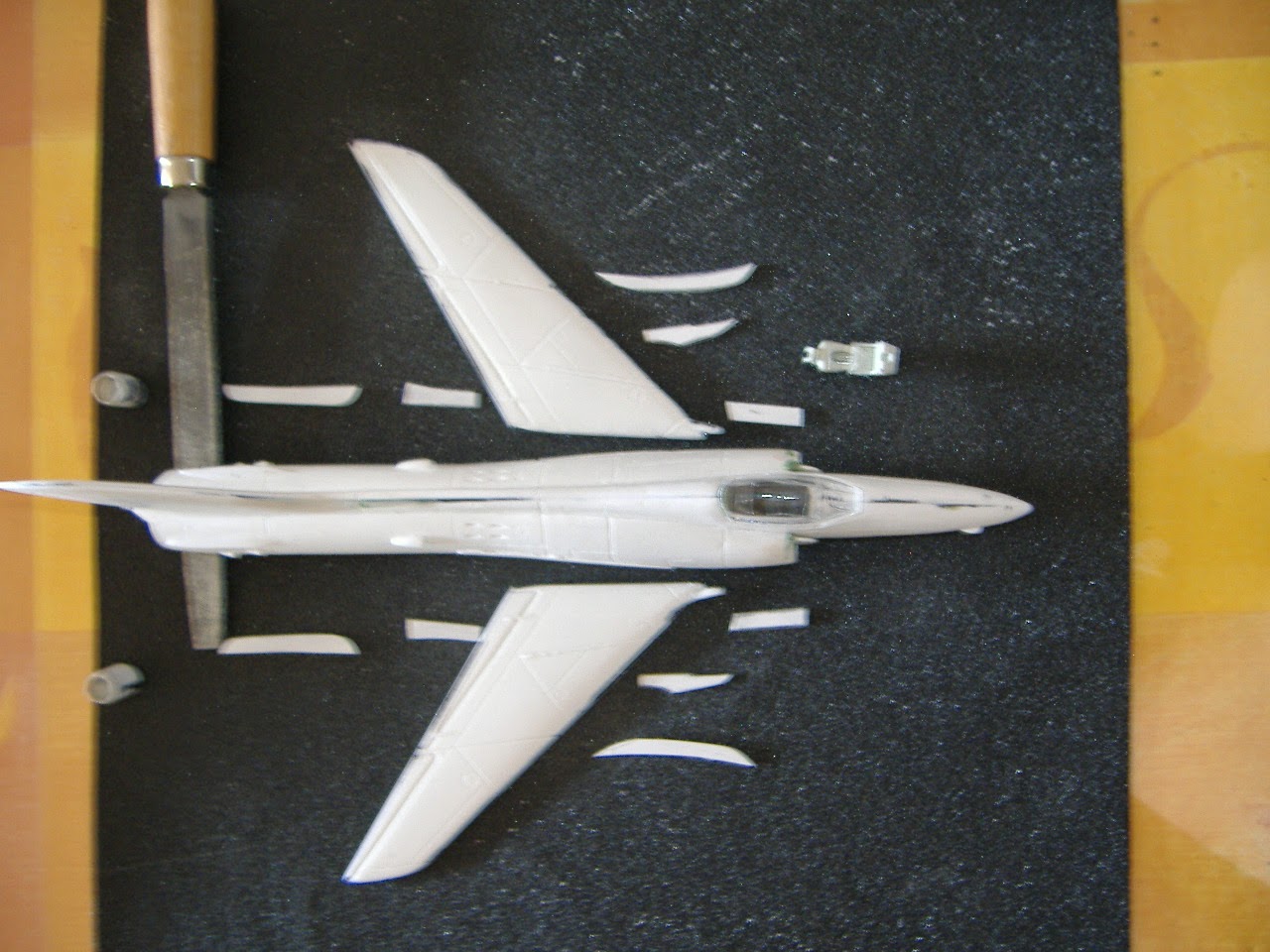 Slowly everything is coming together. The cockpit canopy (which I took from a MiG 19) still needs some filling with green stuff, the fuselage needs another go with putty in some places but other than that its starting to look like a proper airplane. If works continues to go on like today I might be able to put primer on next weekend. :-)

It's been a while since I last worked on my Q-5 "Fantan".

I have added the air intakes and put together the two halves of the fuselage. As you can see, a lot of green stuff was necessary to fill the gaps. :-(

I have not sanded the model yet so the filled gaps look pretty rough on those pics. Once having sanded them and adding a layer of fine putty (even more sanding afterwards) I am sure it will be looking OK.

I have ordered a 1/72 scale MiG-19 since the Fantan and the MiG are similar in appearance and the Q-5 is based upon the famous Soviet fighter. Some parts of this kit will come handy to complete the Fantan. 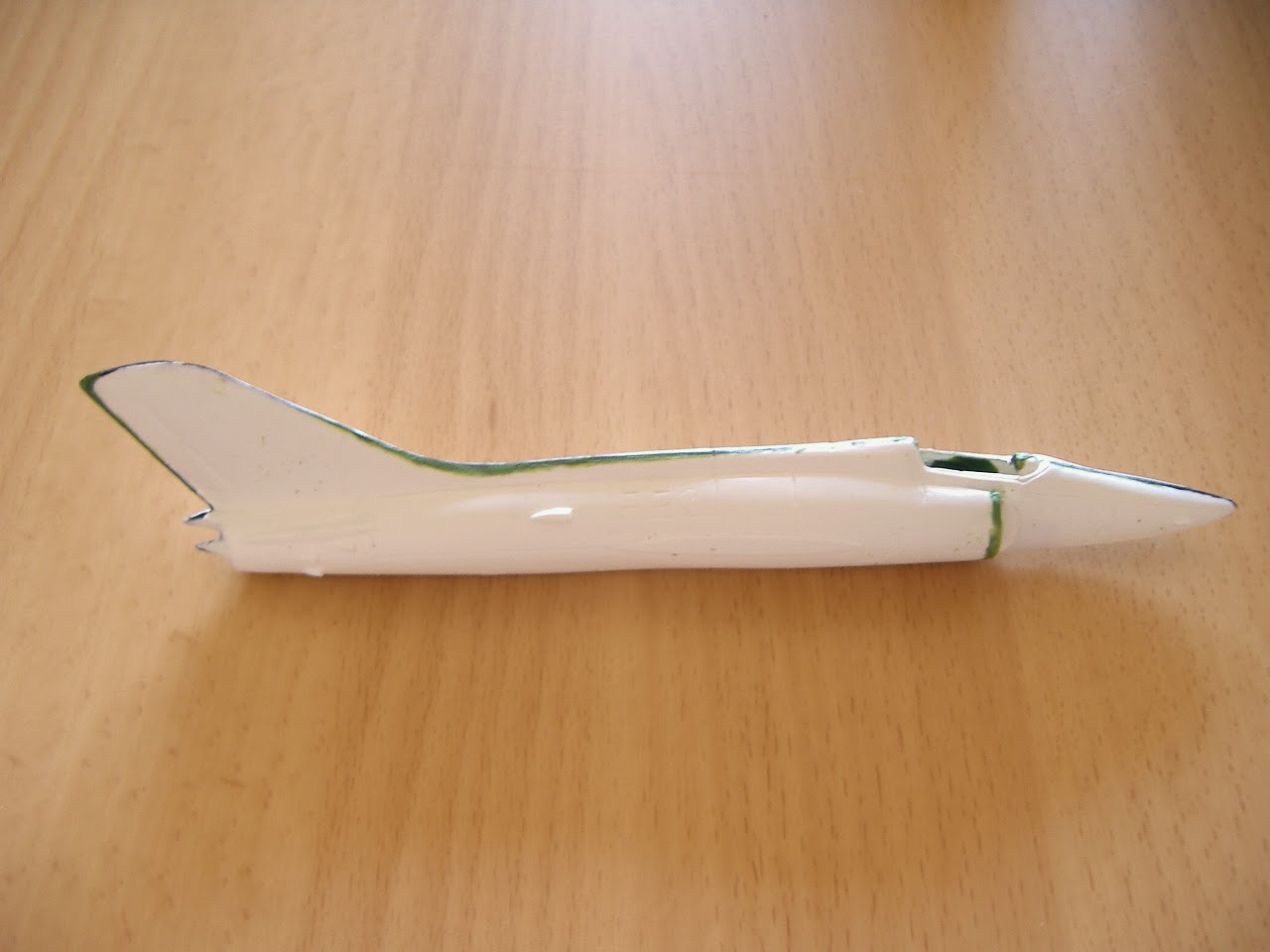 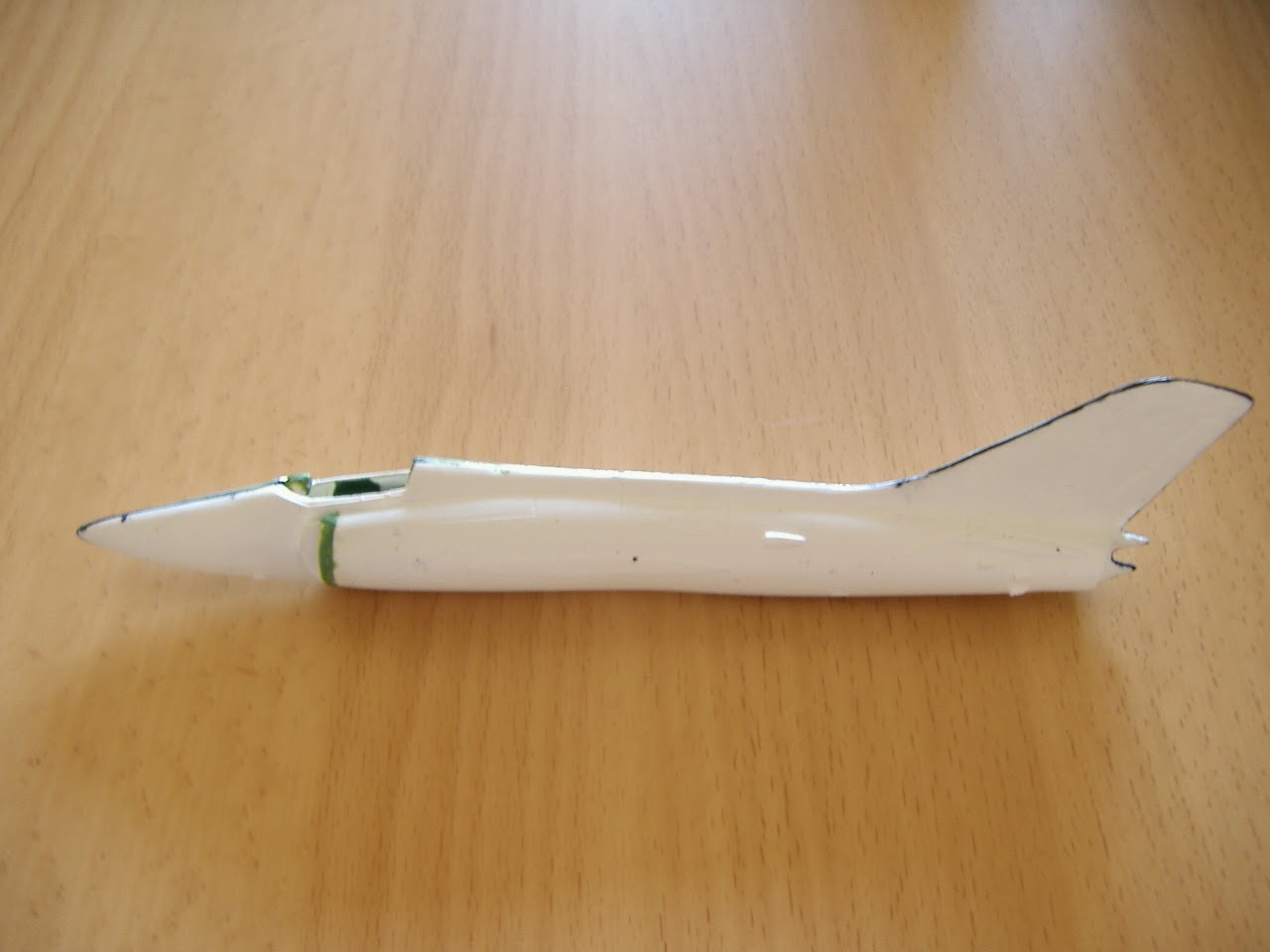 Today I continued with sanding the parts of the wings and fuselage.

Here is what the wing's upper and lower half are looking like after I sanded them down: 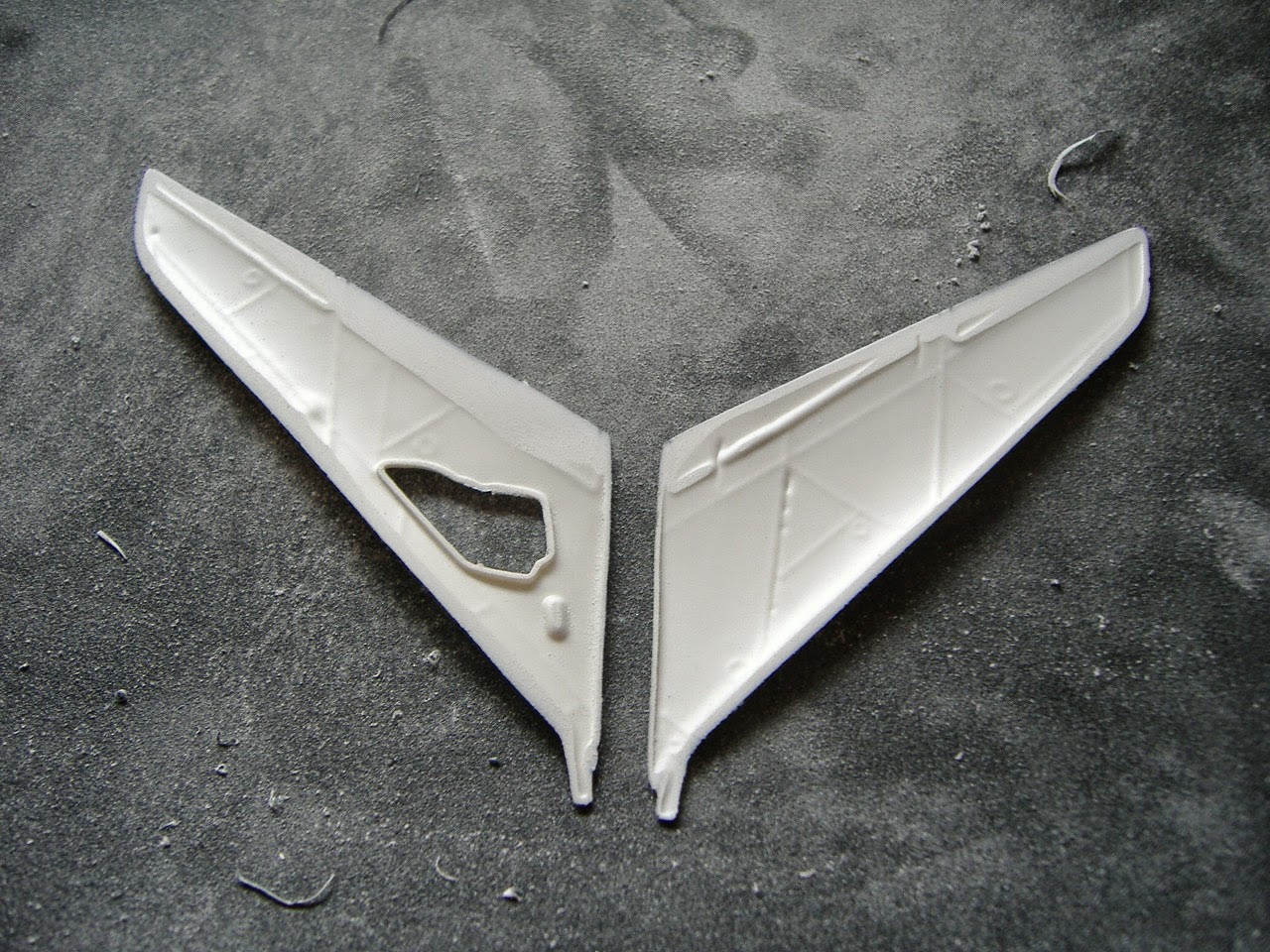 And then glued together: 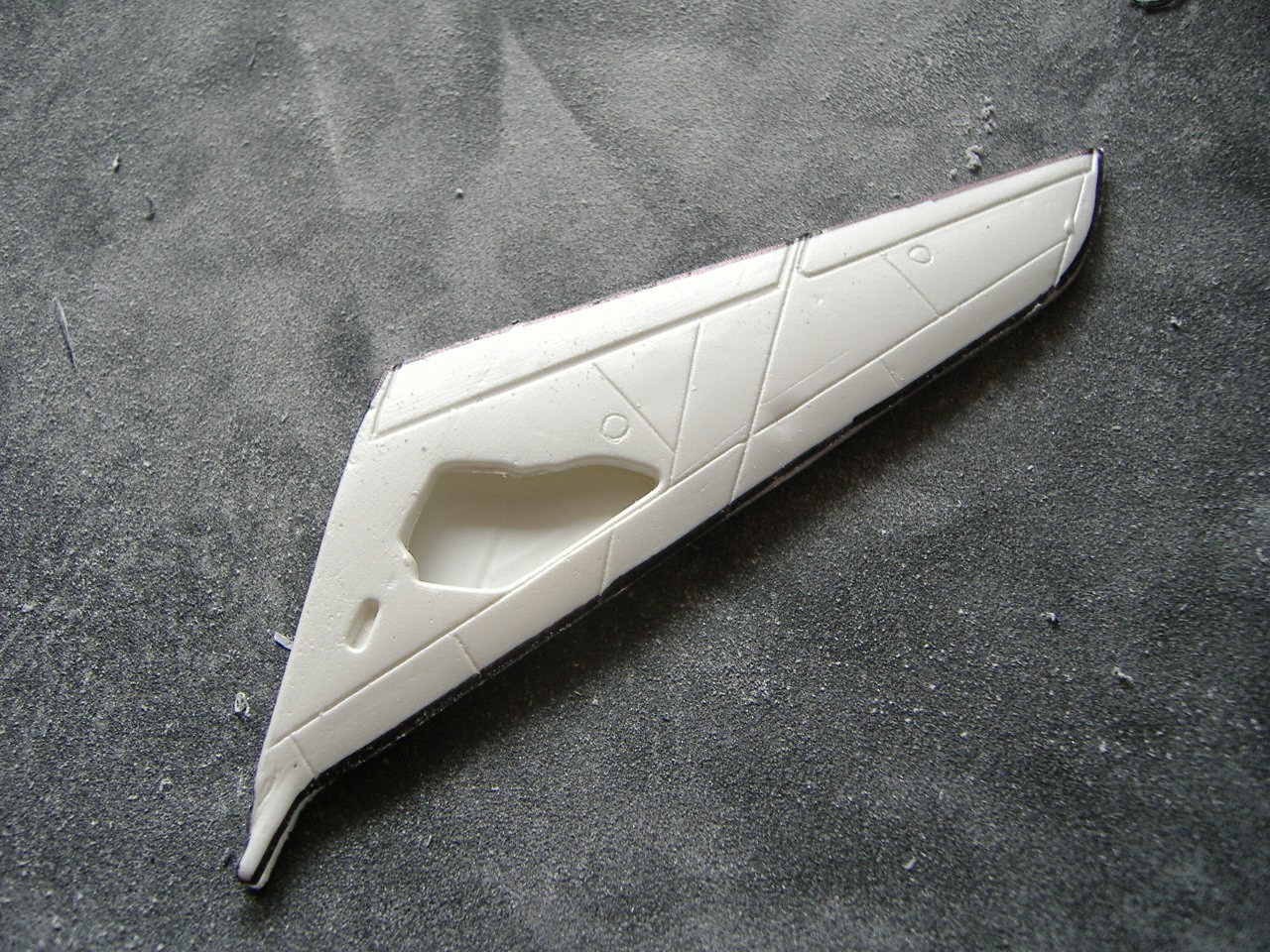 Obviously the parts will need some trimming here and there but more or less they fitting together quite well.

The fuselage was sanded down to a certain degree, too. I opened up the air intakes and cut out where the cockpit will be placed later on. 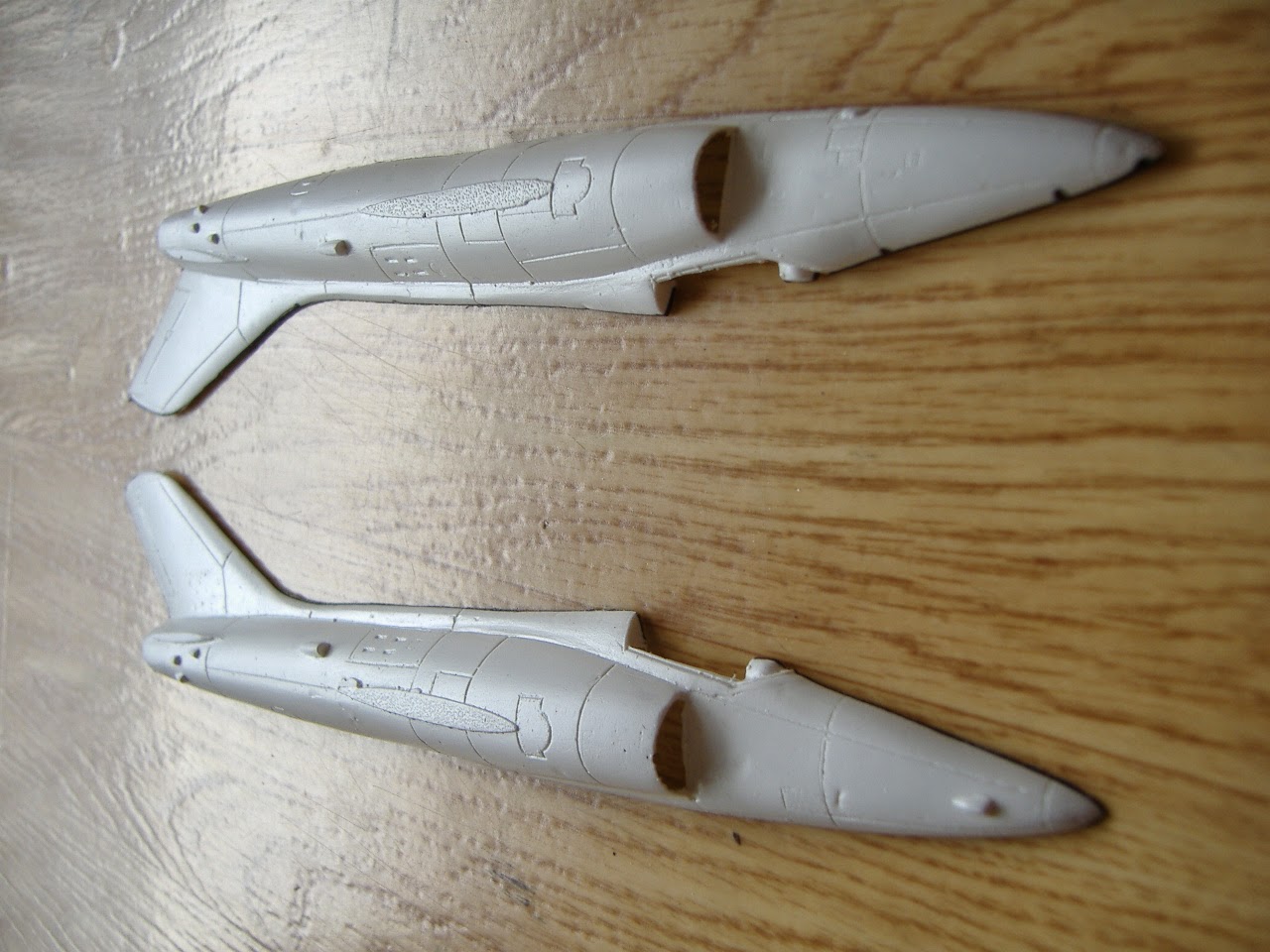 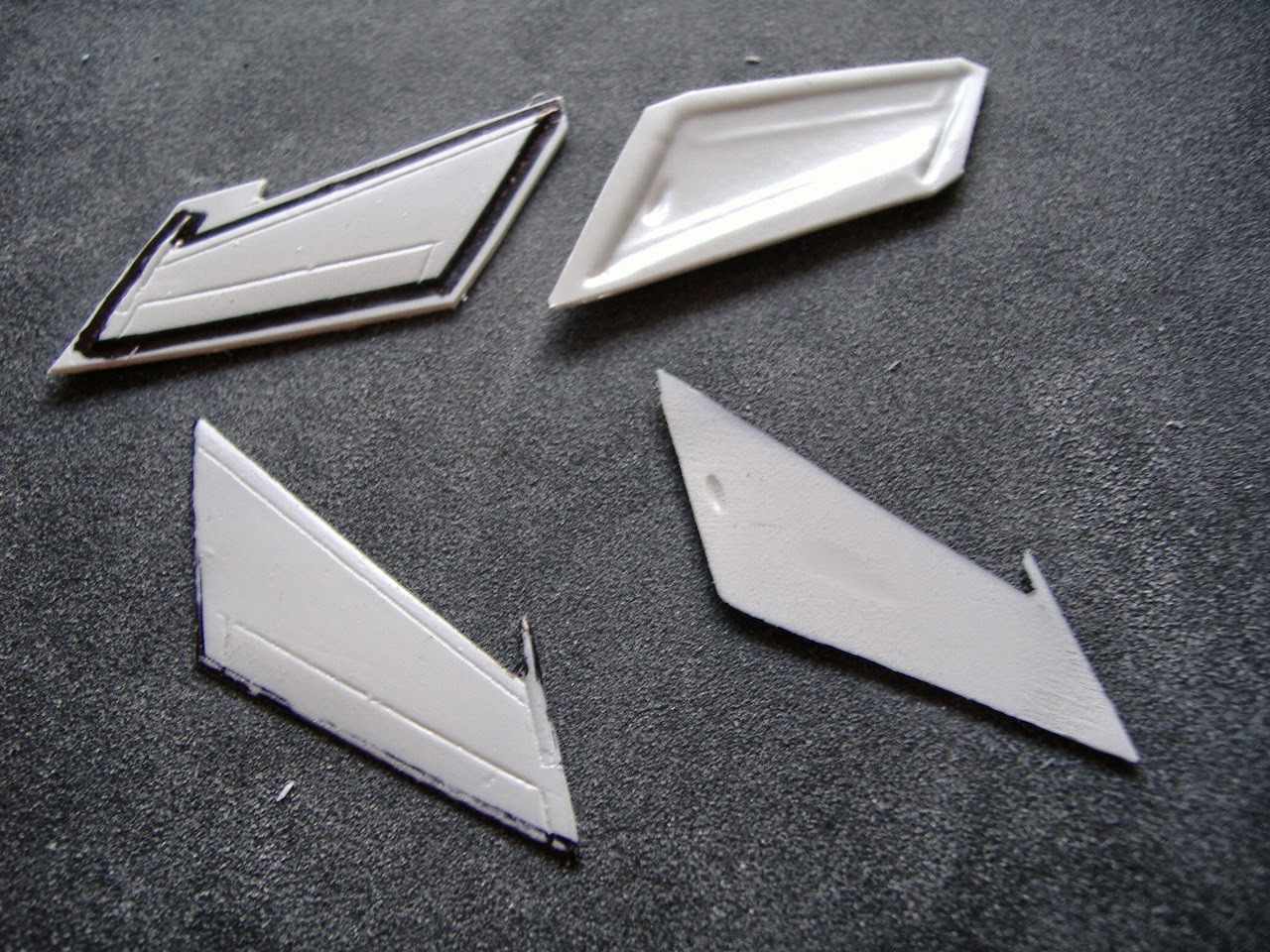 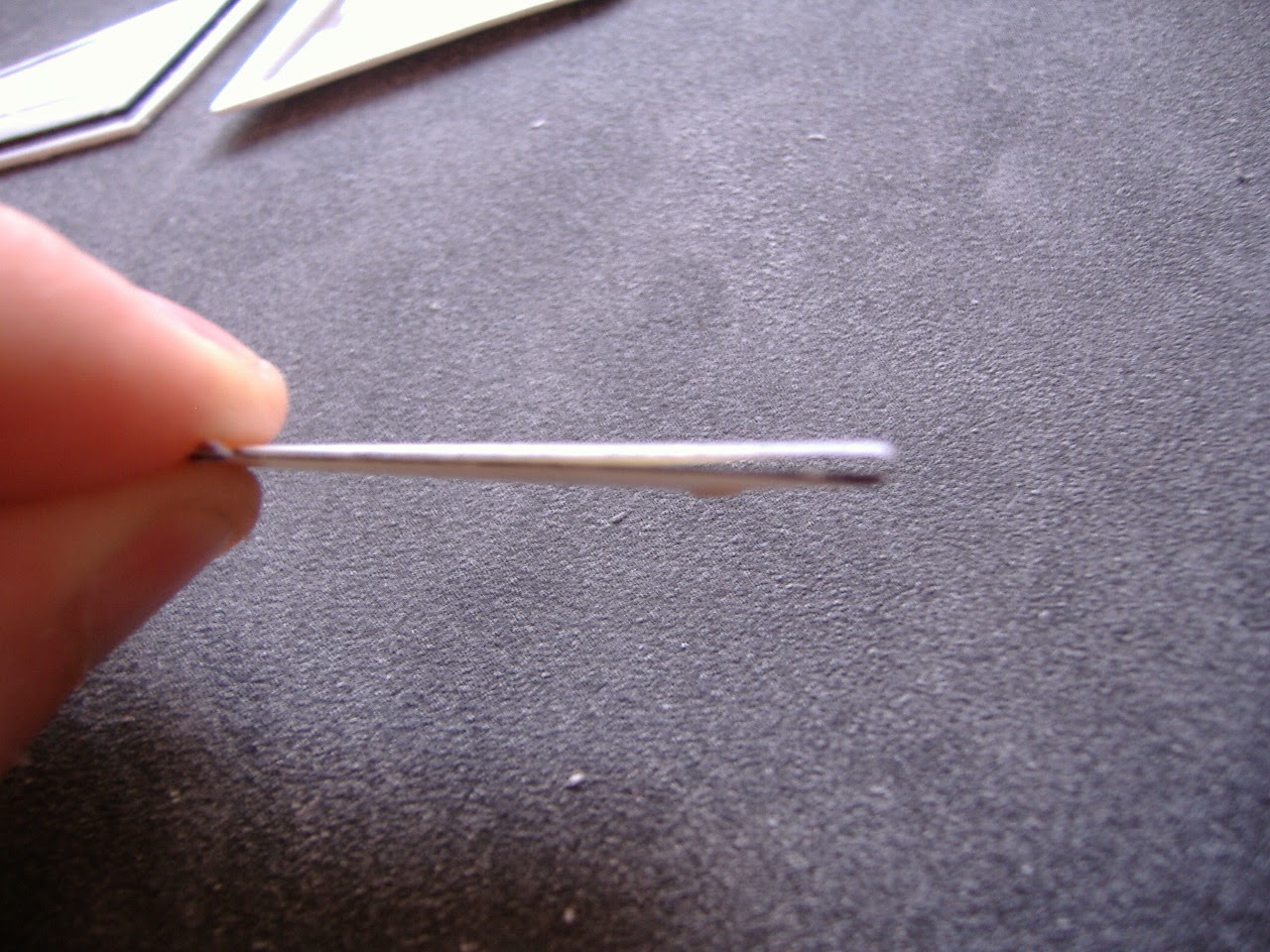 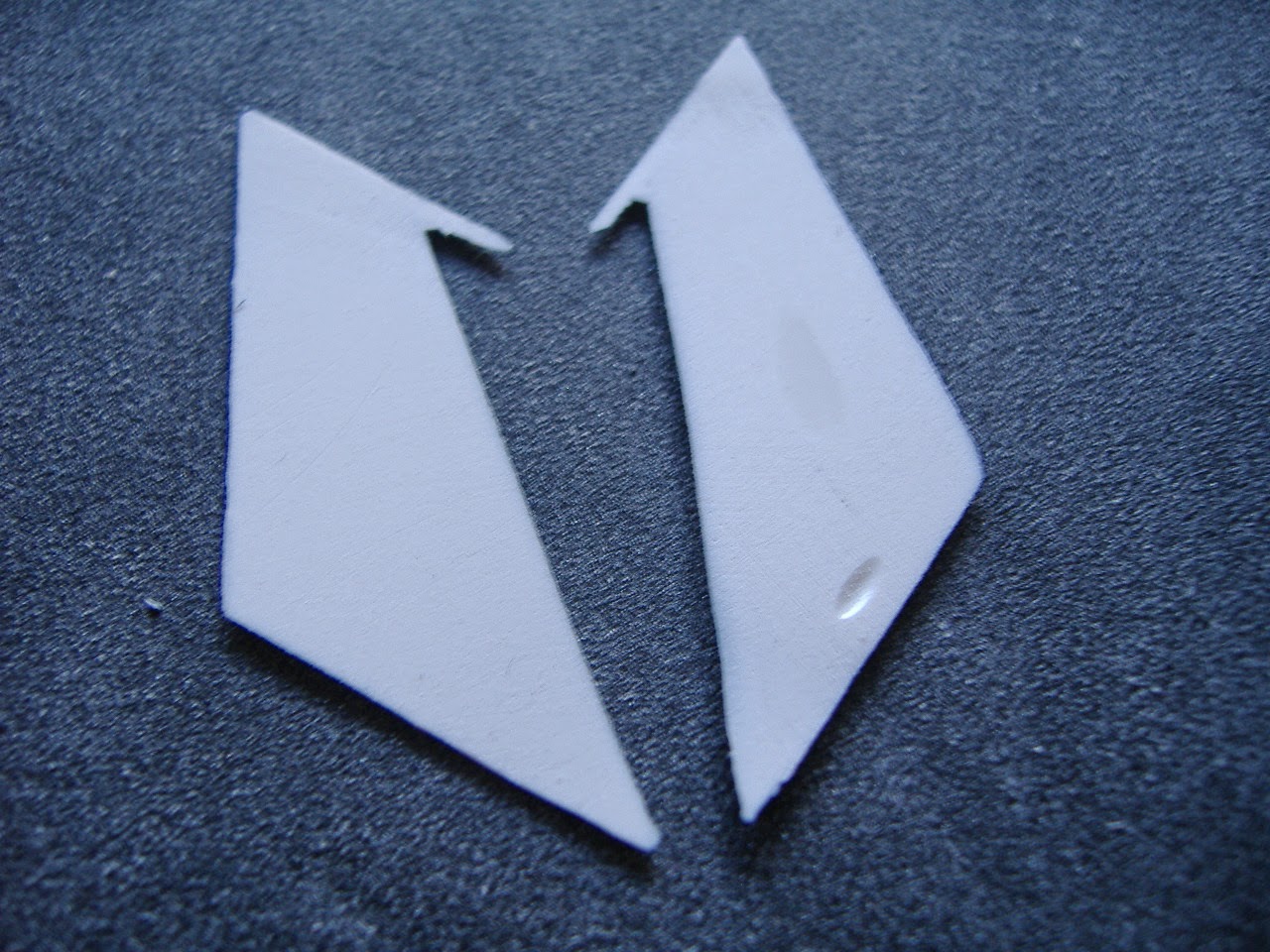 Tomorrow the sanding process will contine and I might already have a wing or two show off with. :-)
Eingestellt von Chris M. aka "Sgt. Scream" um 22:09 No comments: