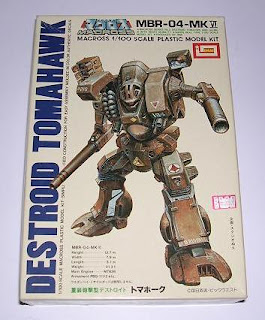 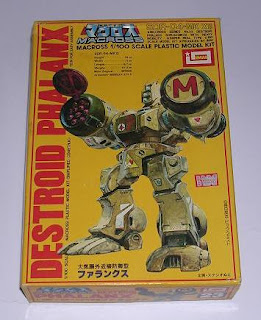 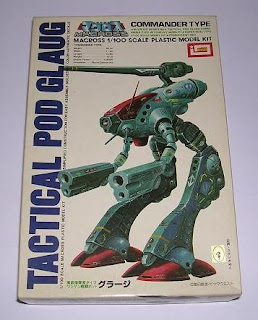 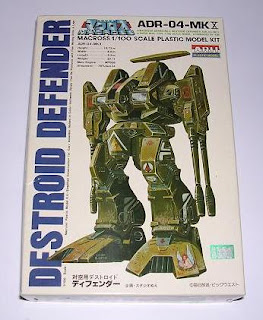 
Since I got into the tester team for Ambush Alley Games' "Tomorrow's War", I was wondering how my own forces were going to look like and what I actually wanted to field. TW (=Tomorrow's War) comes with its own made up fluff section that you can use or settle your conflicts in. The game itself is generic - it allows you to do any Sci-Fi background universe, be it stuff like Star Wars, Halo, Aliens or god knows what.
For myself, inspiration for troopers, vehicles and their look came out of many different media, but mainly Anime movies and video games. I always loved "Mecha" style stuff and having watched animated series like "Saber Rider" or "Gundam Wing" and having played games like the later volumes of "Command & Conquer" or "Mechwarrior" for sure influenced my decision:
I want War Walkers!! Or as it is called in TW: "Armoured Battle Suits" instead of tanks. I am going to use the above shown "Macross" in 1/100 scale to make up my own faction for the conflict settled in the TW universe. Of course there will be tanks, infantry and other stuff, too. 15mm sized miniatures are the way to go - and there is many of them (mostly looking like the master chief out of HALO for some reason).
For that reason I ordered 7 of the above shown plasitc kits from Japan, plus some more (smaller) resin kits (drop ship and smaller walkers) from the US.
I am not yet decided on fluff for my forces or an actual name, but they will be a mix of stuff inspired by the background universes of StarCom, Battletech, HALO and Command & Conquer.
Eingestellt von Chris M. aka "Sgt. Scream" um 15:18

As a fellow playtester of TW I really look forward to what you decide to do with it Chris! I think I am going t use TW to bring out some of the old 15mm GZG stuff I have and maybe do some 1/285 scale scuff for larger battles.

@Paul's Bods: I am normally a 20mm buff all the way but for TW I'll go with the smaller 15mm stuff. There is just more available in the smaller scale than there is in 20mm.

@ArmChairGeneral: GZG will for sure be another source of stuff for me, too. I'll need infantry and drones for what I have in mind :-)

Got a pair of the 1/100 Maurauders...got to paint em...but yeah..they're going to be in Classic Battletech colors, I just need to find some of the others and some light 'Mechs.
I wanted to to a "Kick the Can" game where we show that properly handled infantry can take a 'Mech down.

All of the stuff here was released in 1:72 scale under the "Exosquad" label in the USA. THey sold for about 5 USD each when I was a twelve year old in Florida. I am so happy to still have them in perfect condition.