"A Few Blocks Of Hell" - a Force On Force game report

Scenario played:
"A Few Blocks Of Hell", US Army in Fallujah, out of the FoF (Osprey) rulebook.

Optional rules used for the scenario: "Juba" (a sniper for the Jihadists) and "Raindancer" (a FO with medium mortars on call for the Army). 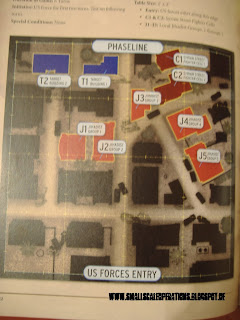 TURN 1:
Initiative: US Army (as dictated by scenario)

1-1 merges with 1-1-B and they make a rapid move and decide to fire on JD1 once in final position. Using the method that works best, I moved the Squad Leader figure along the path they will run. JD1 and JD2 want to react. 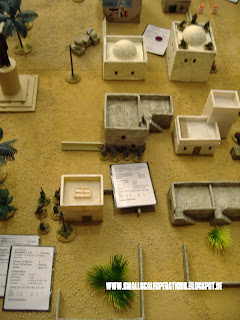 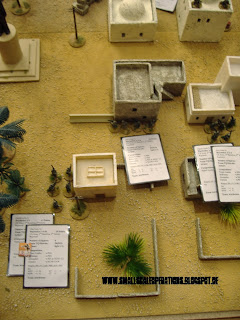 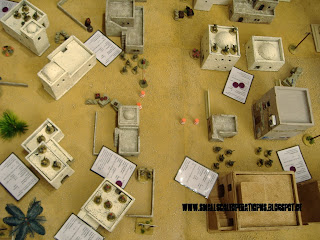 One Jihadist gets hit and and goes down. We rolled to find out who got hit, the Leader goes down. With a casualty ("callous" was used to quicken things little) the Jihadists take their Morale Test. They were retreating.

1-1-A makes a rapid move with JD5 trying to catch them in the open. Reaction Test fails.

1-2 (leader) and 1-2-A rapid move towards their mission objective. JD2 again  tries to react and fails. "Juba" fires his sniper rifle but thank god, he fails to do damage. I chose to use the chance and try to spot the hidden sniper team, since he fired a weapon that is not suppressed but I fail to turn that bonus into something useful and so I move on, unable to find the location of the Sniper shooting at my boys.


TURN 2:
1-1 and 1-1-B rapid move towards a corner of a house and want to fire onto JD2. They'd like to react and fail (again). The fire of the Army resulted in zero figures down and no suppression.

1-2, 1-2-A and 1-2-B as well as the FO (Raindancer) move towards their objectives by rapid movement and aren't seen by anyone.

JD1, JD3, JD4 and Juba move to get into positions allowing to intercept the Army on their march to the houses they are looking for.

And before I foret to mention it:
1-1-A und Raindancer together with 1-1-B declare to be on Overwatch now.

TURN 3 (now it is getting really interesting):
Beginning with turn 3 initiative can change according to the scenario. So, we roll and guess what: the Jihadists actually beat me to it.

The local Jihadists JD1 fire on my advancing fire team and I fail to react in time, fire is exchanged and the RPG taking its toll on my Army soldiers. A rifleman was hit and went down. Making the Morale Test I fail and they withdraw to cover.
Raindancer and fire team 1-2-B also react to JD1's intensions and win the reaction test. With my opponent rolling a "1", the FOW card "Death Or Glory" was drawn and played on JD7 (random). The fire onto the Jihadists resulted into them being pinned.

They also lose their Leader, check Morale, fail and withdraw off the table! (no cover available).

JD4 was activated and moved with tactical speed into position to fire upon 1-1-A. My soldiers want to react and I fail the test with another natural 1. Fog Of War turnes out to be "In Your Face" and grants me 3 extra victory points. Thanks a lot.

We exchange fire and my fire team survives without a scratch due to bad die rolls on my mates' side. My return fire kills a rifleman and they have to test Morale. They pass and stand (but keep being suppressed until rallied).


Payback time. 1-2 and team 1-2-A move tactically and fire upon JD4. The Jihadists declare a reaction and I remind myself of the still placed markers on some units that went on Overwatch. I roll the die and still fail. Noooo!

So the reaction between Jihadists and my squad leader and fire team 1-2-A follows. Another 1 rolled results in FOW "All Clear". I had won the test so I finally open up on the JD4 squad. Three hits scored, three guys down. The following Morale test fails and the holy warriors retreat 11 inches into cover.

JD4 fails to rally but since they are in cover they just stay there.
I make my First Aid check on my downed Rifleman and have to find out the boy is dead :-( 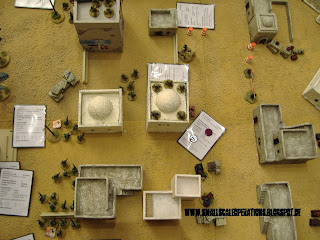 TURN 4:
The US keeps initiative.

1-1 and 1-1-B rapidly move (time is becoming an issue to reach the objective). Since no one can trace a LOS onto them they just walk as I please.

1-1-A however is seen after I activate them and so JD5 declares its reaction with fire. 1-1-A wins and JD5 receives four  figures being struck by incoming fire, gets pinned by the sheer volume of fire and yet is capable to achieve a STAND on their Morale Test! The lonesome survivor shoots back but of course that was to no effect. 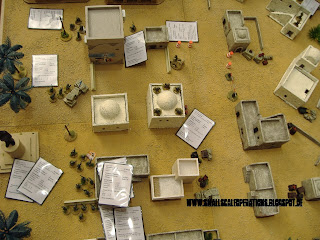 1-2-B and the bored FO (hadn't called in my arty yet) moved tactically and are seen by JD2 who immediately react by fire. Since I declared units on overwatch last turn, Squad Leader 1-2 and team 1-2-A open up and suppress JD2 with their Leader being shot. They pass their Morale test and stay were they are.

The Jihadists and all Syrian Street Fighters move with rapid speed into new positions to flank the Americans.

JD4 flees off table since they failed their Morale Test again.

We began the turn but decided that its impossible for the local insurgency to stop the US to claim the houses on top of the scenario map. Even with less victory points for not reaching it by turn 4, the Army would have won with 18 points for killed Insurgents even without owning the objective. The "In Your Face" card would have done the rest. So we stopped it there. 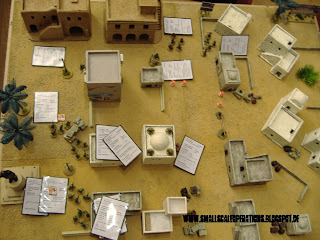 Its noteworthy that the text above is missing some very specific details, so don't be surprized if something seems not to make sense. Can't tell you why though (seriously, deal with it).  The pics are from the game but not placed in between the write-up to display any events described, just some random images taken during the game, nothing else!

Love the table and the game! Maybe next time write up the AAR as more of a combat narrative than a succession of rules mechanics? Just a suggestion.

Nice AAR- it's a great scenario too- enjoyed playing it (ended horribly for the US player with WIA being captured... :( )

cool stuff. a nice report and a realistic sounding turn of events

What are the cards that you have by every unit?

I copied the unit entries out of the rule book and printed them on cards. My friends are not all as geeky as I am and thus these cards help them to quicker see an unit's TQ and which weapons they carry.