Good progress was being made through the recent days and my Missile Support Squad is finally finished. Apart from the two missile launchers I was showing you a few days ago, two more Marines have now been added. AVP: Unleashed asks for a minimum squad size of five models, so I was wondering what to do with them. I could have gone with just two random grunts, but that isn't really something special, is it?
Going through my spare parts I was fishing two more of North Star's "not" Colonial Marines out of a plastic bag. Looking at them, I found out they were supposed to carry shoulder-slung M240 incinerator units and therefore had a shoulder-strap sculpted on them already. My two missile launcher toting Marines each do only carry the actual launchers with a rocket tube, but no spare ammo. So, the idea was born that the two latest additions will be carrying more missiles in tubes over their shoulders. The idea came from modern day US Marine Corps' SMAW units.

Even though both of the latest models are having the same body, I used different arms on them and different heads. One carries a Motion tracker, too. Playing around with Anvil Industries' muzzle flashes, I decided to add one to a pulse rifle. It came out so good, there is going to be more of them! 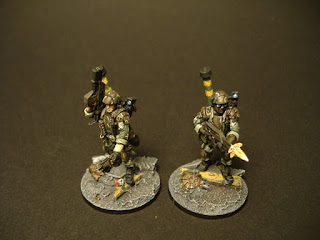 The base toppers are as usual also from Anvil Industries. Note the pack of cigarettes on the one base, a really nice detail! 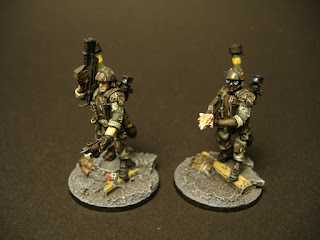 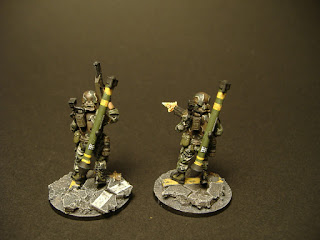 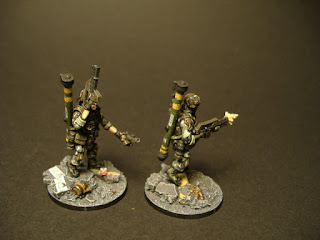 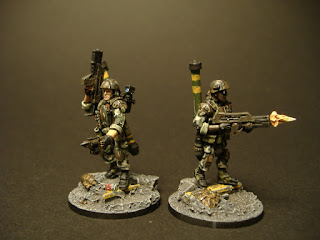 The missile tubes are without the launching module. Just like it is done in modern day squads, the parts for such heavy weapons are distributed throughout the squad members, so everybody carries about equal weight. I added protection caps to both ends of the tubes, so it doesn't get damaged when the squad is moving around. In my imagination, the caps would be pulled off, the tube then locked into the launcher module and can then be fired. The protection caps in fact are even being made of 1/72 scale end pieces of a M-47 Dragon ATGW launcher. The tubes themselves are Q-tips cut to fit the the correct length of my Missile Launcher Marines' weapon modules As you can see, some heavy engineering went into these chaps. 😂
Eingestellt von Chris M. aka "Sgt. Scream" um 22:36