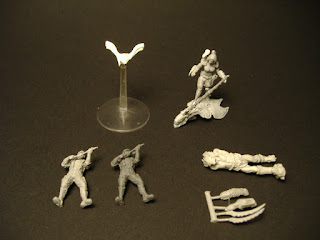 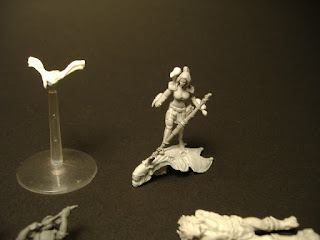 Some new models have arrived at my house this week. More specifically a Predator Drone (as seen in Predators), two Colonial Marines Sergeants, a custom-built Machiko Noguchi human Predator and Predastore's "Victory Hunter", who will be turned into a "Tracker".

Predastore of Swiss is selling custom sculpts and until a few months ago still had a large range of not-Predators in their webstore. Nowadays you still might find some in retail stores or on ebay.

The Predator Drone is a custom sculpt from a nice chap who made his own and was able to recast it a few times. I got my hands on one of the copies.

Machiko Noguchi was built by a friend and I will paint her. The miniature is based upon Valerie Duval from Prodos' Warzone range and got kit-bashed with the Female Predator figure and some other parts to create the not yet released (if Prodos ever will!) Machiko. The character had a series of novels and comic books dedicated to her adventures.

The Sergeants are the standard version that was available to order during the KS campaign.
Eingestellt von Chris M. aka "Sgt. Scream" um 17:41