Got my hands one a blast from the past: Oldhammer Vindicator conversion (Epicast)

Every now and then, you get lucky to be at the right place at the right time. As it happened to be a few days ago when i was skimming over the pages of the Lead Adventure forum. A thread caught my attention, as it was asking for advice on some resin parts that were meant to be upgrades for certain vehicles that existed in Epic 40k, but back in the day were not produced by Games Workshop for the larger Warhammer 40,000.

There were more companies in existance a long time before GW's own creation of "Forgeworld" to expand the series of plastic kit vehicles that they had in their shops back in the early days. The more prominent ones were Armorcast (who also did some stunning large scale Battlemechs) and Epicast. In the past I owned several Armorcast vehicles, to include two 40k sized Reaver titans and two Warhound titans as well as the excellent super-detailed Baneblade.

With my current focus on the Rogue Trader era models it was only natural that I fell in love immediately with those old resin parts that Angie was showing in the thread I spoke of above. To make things even better, I mentioned more in a sidenote then really seriously that I would buy them instantly. Well you guys can guess: she sold them and I had to have them.

Although these are Epicast parts, there was an Armorcast variant, too. For the latter they produced a 2nd edition 40k datafax and it can be found in their in-house fan magazine "Inquisitor" (issue #17). Check ebay, that's were I got mine for a good price.

But enough of the long talk, here are some pics (these were made by Angie in her offer when she sold the parts): 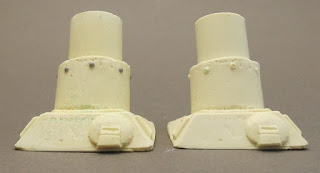 The parts will need some filler, some green stuff and lots of sanding, but they will look like the one from Tony Cottrell's (BTW, he later worked for Forgeworld) Vindicator conversion when finished: 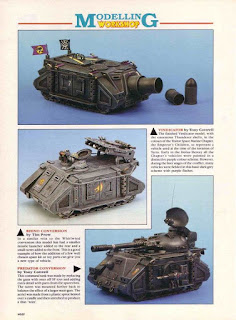 Here is a small add that Epicast was releasing in the early 90's for their range of models for Warhammer 40k. The Vindicator can be seen in the right corner: 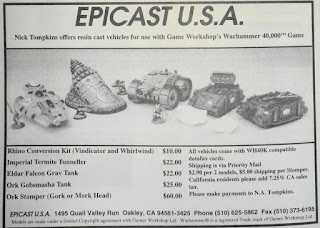 Now I hope to secure myself a third copy of the gun. Wish me luck!

I think Tony Cottrell is the boss at Forgeworld now?