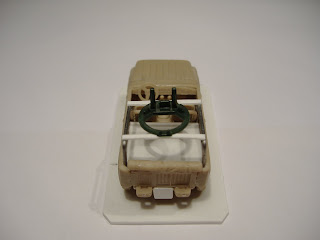 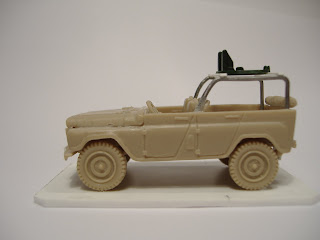 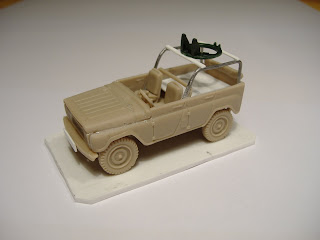 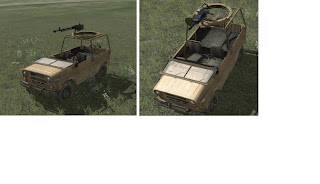 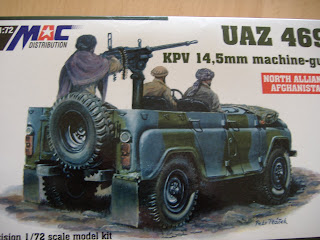 A bit of progress on the UAZ 469 weapons carrier:
If you look at the box cover, you'll see they have the weapons simply pole-mounted. To be honest - I don't like that look at all. It might be a good way to mount a recoilless rifle, but now imagine to try to hang on that thing while the driver is doing something like 60km/h cross country.
The way the British military fits its guns to their Landrover WMIKs is what I want for my UAZ 469s as well. I found some inspiration in a pc game that features the UAZ and came up with these little conversions (see pics).
I've added a platform from 1mm plastic sheet to the back behind the seats, used 1mm wire to construct the rear roll bar cage that features a well in which a gunner can stand and swing his weapon in a 360 degree arc of fire around on a rail and a weapons mount made from pieces of a Revell Dingo kit (I used its hatch for the latter.)
Now its time for sanding and to put some primer on. And depending on how fast the other two UAZ kits are sent to my house I will either come up with assembling those next or with painting something of those vehicles. The latter I make bet on people are waiting for the most. :-D
Eingestellt von Chris M. aka "Sgt. Scream" um 16:10