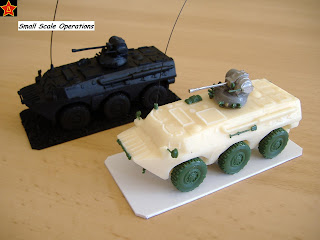 Today I finished the conversion of a second S&S models WZ 551 Infantry Fighting Vehicle. Another two are already purchased, giving me enough rides for a whole platoon + command section. I only hope Shaun will release the Dongfeng copies of the American HMMWV pretty soon. I need some recon forces for the PLA.
If he won't come up with the release of the HJ-8 carrying version of the WZ 551 soon, I will by no doubts start a heavy conversion on one of the IFVs.
Eingestellt von Chris M. aka "Sgt. Scream" um 17:33

Hi Chris, this is chen (in the Guild). I've just found here, really a nice blog.
May I please know if you've finished these 3 models? If yes, any chance to see them here or in the forum? :)

Chen, I answered your question with a private message at the Guild. See you there.