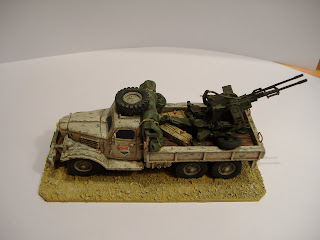 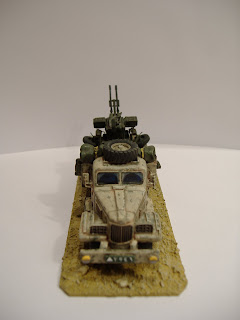 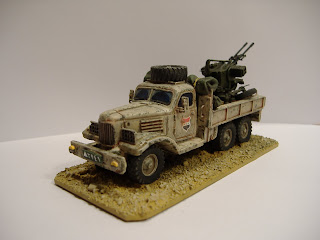 Got back to painting today and tried finishing off some stuff. Hence, I gave the ZU-23-2 a drybrushing in two stages for rusty, used and dusty look. I covered up some of the way too big blotches of chipping paint and totally repainted the wheels. I decided Tamiya's NATO black looks more like tires as GW Chaos Black ever will (lol).
Gave the ZIL an Iraqi liscence plate and in general just applied some details here and there. Than I had an (rather brilliant as it turned out to be) idea: dust effects on the windshields and a look as if the wiper blades have removed some of the desert sand from the windshield.
I did that by cutting some templates out of scotch tape with a scissors, applying these to the model and then just drybrush it with some GW Bleached Bone. I love the effect. Looks really cool.
That leaves the bases to be done, some more minor details and a repaint of the blinker(s) into a rather orange tone. Yellow's too bright IMO.