Panzergrenadier platoon for my mid-'90s Bundeswehr 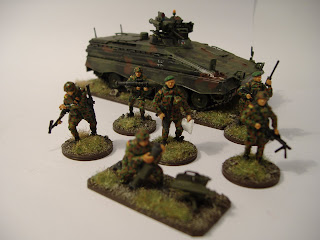 These are among my first ever painted "moderns" after years of GW related stuff. I used Revell kits and boxes of infantry for those mid-'90s Bundeswehr Panzergrenadiere (all plastics in 1/72). For some reason I have never shown my early works, but as I never tossed them away and recently stumbled over the box they were in, I thought I might as well share them with you. :-D
For the pic above I cheated - the Marder IFV isn't this command squads' vehicle. I have to admit the one for these guys up to day has not even been built, although I have it sitting in my shelf for years (maybe I should finally do that *doh!*) 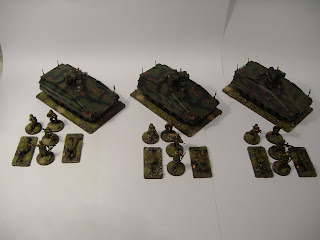 The whole platoon - minus its command squad. 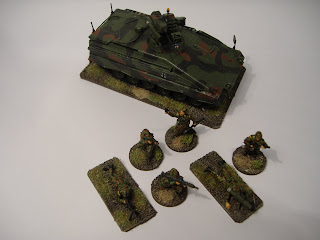 Six Grenadier dismounts and their dedicated transport: Marder 1A3 from Revell. 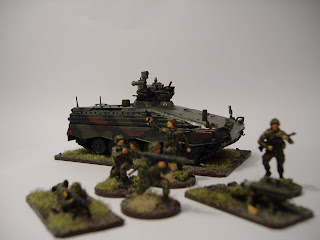 Enjoyable post. Good to see these Germans seeing the light of day.

What glue do you use on the figures? My son and I have the same set of paratroopers. I have no idea what to use.
It has been a long time since I have done anything with models.

Simply use superglue for the infantry and Revell's "Contacta Professional" for the plastic kits.

Thanks for the reply. I did try super glue and they popped right off after a day with minimal handling.

I tried basing them on 20mm stands. I'll post some pics of my insanity later.

"popped right off" from where? Their base? I use liquid superglue and it works fine for me. The only thing I hate about the soft plastic is the paint flaking off sometimes if you don't give them a prior wash with soap water. In general I rather use 20mm pewter figs than plastic.

Hi Chris, Thanks for your replies. I'm going to try a different brand of super glue. See if that works. I'm not very experienced with these 1/72 scale guys.
Are there any gaming stores in our area? I see you live nearby. (I live near Amberg) I do a lot of 28mm mini painting these days.

Not really. All the good stores are gone. Nowadays all I buy comes off the internet. There is plenty of suppliers and shops to pick from.

That's to bad, the main part of gaming is the "live" community.

I am just reviving my blog. I use to be an MMORPG blogger for years but I stopped about two years ago and deleted my blogs. I'll post some of my minis today. Please take a look.