I was experimenting with the base colours of the Iraqi house I am currently working on. Some friends passed on pictures they took in the middle east and those turned out to be a huge source of inspiration as well as a good reference for painting. 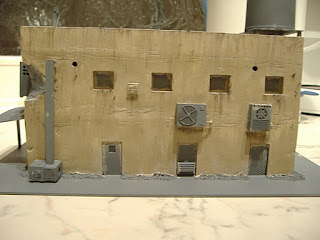 This is the "base colour" although it actually is four colours!! I started with a tank brush (GW), painting the entire building in Dheneb Stone. Once I was done, I used the same brush size to paint on some "streaks" of Kommando Khaki, followed by Iraqi Sand (Vallejo) of which only on the edges of windows and rooftop some streaks were applied. Khemri Brown was used from the top down, streaking on some random "rain marks". 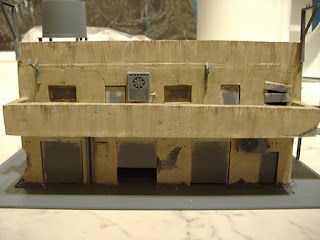 Finally, some Charadon Granite was used to splash on some spots of darker brown. These marks can be all sorts of things - bullet holes etc. 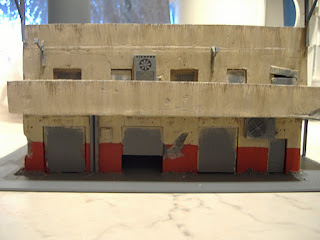 After the base colour(s) dried, I used masking tape to mask the upper part of the building. I wanted some colour to break up the overall sandy look. A red stripe goes all around the building (its about the height of a 20mm figure). 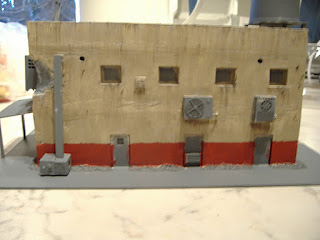 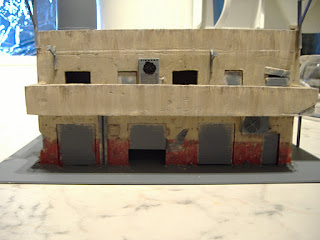 Using the same colours as for the base colour and parts of an old Citadel miniature blister "sponge" (the stuff GW puts behind its miniatures in blisters), I was weathering the red stripe that leads around the first floor. 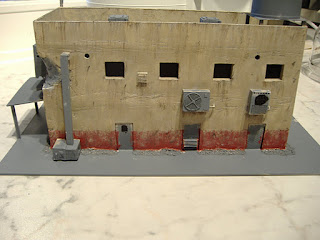 I just dabbed the sponge into one of the base colours at a time, dried it on some kitchen roll and then went ahead putting colour down in a random pattern. Finally I blended the worn, chipped paint into the upper half of the house by drybrushing the passage between sand colour and red stripe with Vallejo Iraqi Sand. 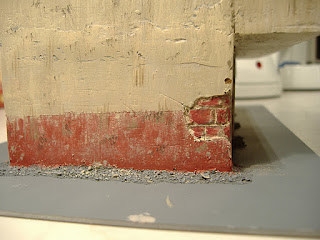 That left me with the bricks being visible in the open parts of the stucco. Reference pics clearly show that both, classical "terracotta" coloured bricks and sand coloured ones made from mud are used widepread in the middle east. Sometimes even both on the same building. 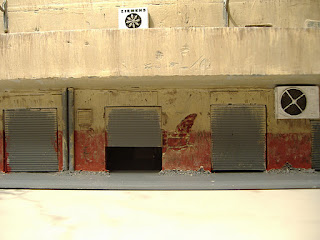 I was trying the red ones first and liked it that much that I decided to use solely red bricks.

I started with a base of Bestial Brown in all open stucco holes. On top I dabbed Red Gore which was followed by Blazing Orange in a random pattern. Make sure you don't paint over all layers you painted before - leave some parts visible. A wash of strong thinned down grey colour was used to determine the joints between bricks. 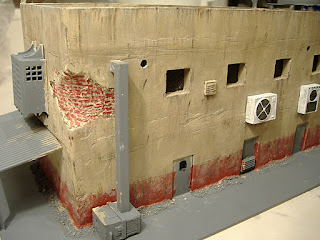 After the grey has dried I brushed Mig Pigments (African Sand) into the gaps and used thinner to fix it in place.
Now off to paint details! :-)