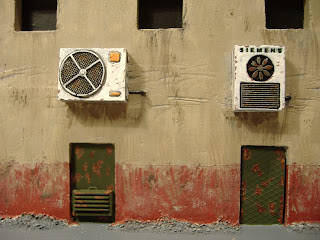 Wo-hooo. More progress :-) Spent some hours to rust n' dust a couple of things. Basicly all you do is painting small random blotches of Scorched Brown, paint a smaller blotch of Bestial Brown on top, add one of Red Gore and finally add tiny dots and lines of Blazing Orange. Looks like rusty metal doors. There is probably better ways to achieve that look, but hey - for the work of a couple of minutes it didn't turn out tooo bad, did it? 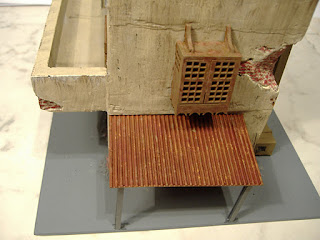 Rusty corrugated metal. I started with a mixture of 25% Bestial Brown, 25% Red Gore and 50% water and painted on a bascoat of this redish-brown colour. I then reduced the amount of water in the mix step by step and painted on random (!) blotches. Due to the wet paint (lots of water) it took a while to dry. Once dried, I painted on streakes (from top to bottom) with pure Bestial Brown and pure Red Gore (use variable length for the "stripes"). With a tank drybrush I then brushed a mix of Blood Red and Red Gore from left to right. Finally, a wash of thinned down Dark Flesh was put into the recesses. When the wash had dried, I used an old drybrush (a really messed up thing) to dab on small dots of Blazing Orange. 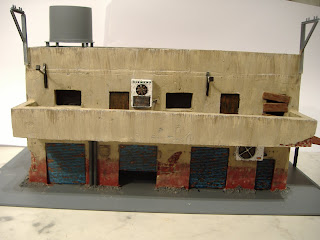 The garage doors where painted with Ice Blue and got a filter of thinned down Black Wash (not Citadel foundation one, the old one). 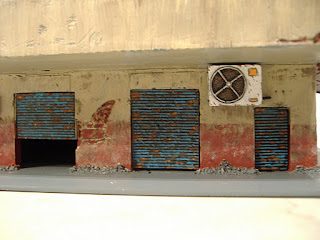 Basicly the rust effects where done exactly as on the metal doors above on the other side of the house. Blotches of various brown colours, each "dot" smaller than the one I painted on before. Then red colours and finally the Blazing Orange highlights. Finally I once again took the base colour of Ice Blue and covered all messy parts/mistakes that occured.

Off for more details now.

Hello,I'm french and I like very much your blog, your figurines and models.
I put one shortened on my blog towards your.
Here is the address of my blog on the same subject

Where did you pick up the air conditioning units?

Hmmm... Your work is so brilliant Sarge, that my own urge for making some 'scratchbuilding' houses goes away... :( I don't like you any more ;)

The building -and the rust effects- look great.

hi, the Air Cons are from S&S Models and Jens Najewitz (Lasermodellbau.de) - the latter only are available with their building kits. Shaun at S&S does the rooftop mounted and wall mounted ones.

SGT Scream,
The houses look great! Are you sure you've never been to Al Taji or the Karkh District of Baghdad??? Looks perfect and very inspiring.