I was able to get these from people around the Battletech forums: they are small 1/144 scale plastic vehicles that originated from the Crab Gunner kit from Dougram.
Although not exactly the "Chevalier" design from Battletech, I was able to add a view details that allows me to field them as the latter nonetheless. I will call this one "Chevalier Mk.1b" and its going to support the infantry component that I have planned for my 3rd Crucis Lancers. 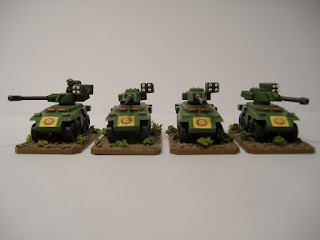 The full lance of 35 ton Chevalier light tanks in all its glory. 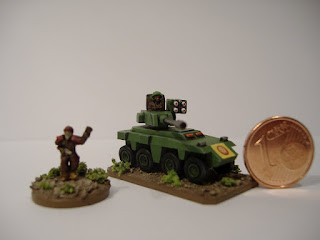 It's a rather tiny vehicle as you can see. Here, next to a Kurita infantry NCO and a coin for scale. Consider this a vehicle used for scouting and recon, just as the mid-80s German Bundeswehr Spähpanzer Luchs. 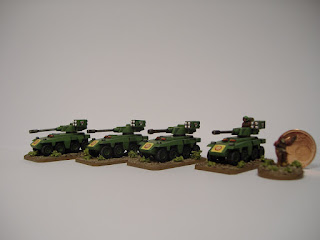 You might notice that one barrel looks slightly different - that's due to one kit missing the original part, so I had to replace it with something that looked similar. 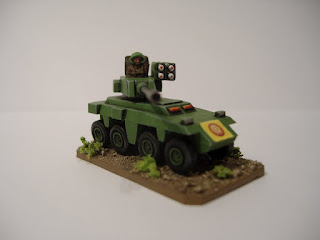 My lance (=squad) commander, unbuttoned in its turret. For this one I had to cut away the hatch and glue it back into an open position. The figure is a Dougram Mecha pilot in 1/144 scale. 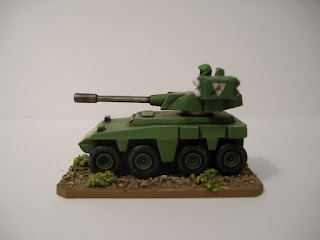 Though the Chevalier's armament is weak compared to modern designs, it has an extremely ammunition-efficient design, allowing it to stay in the fight for longer than other vehicles from the same weight class. For long range, it mounts an Large Laser in its turret. A pair of forward-mounted Streak-SRM-2 allow it to exploit any holes it may have made in an opponent's armor.
The SRM rack was salvaged from Mechwarrior Dark Age vehicles, its not part of the original kit. 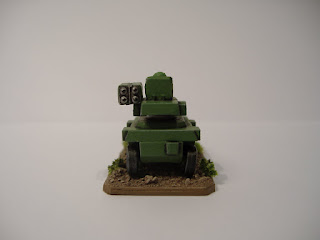 Very nice. They really do look the part.

Looks great, this small scale you habe done an amazing detail work. I'm watching your “Tomorrows war“, parts from the first post on and I'm loving it! Thanks for sharing it.