Another update on Clan forces. This Mech is more or less a test piece. I tried the paint scheme for Beta Galaxy with the paints I had at home (a mix of GW, Vallejo and oil paints) only to see how it would turn out. It's not the best miniature - a re-painted Mechwarrior miniature - but I am pleased with the choice of colours. Looks as expected (at least to me). 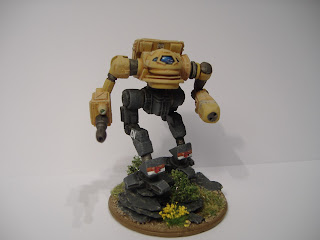 The Kit Fox is a light Clan OmniMech with long-range combat as a primary focus, earning it the Inner Sphere codename of Uller, after the Norse god of archery. 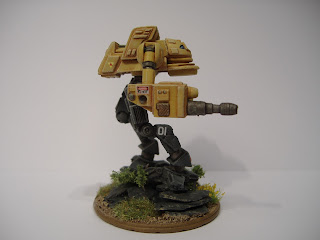 Alternative configuration "A" as shown on the miniature carries a Gauss Rifle. A pretty nasty surprise given the weight of the Kit Fox. 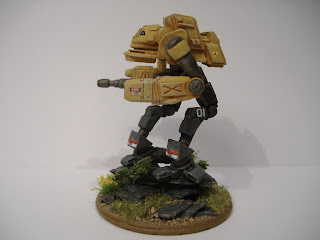 The other arm carries two Medium Lasers. Those are powerful enough to deal damage in significant amounts. 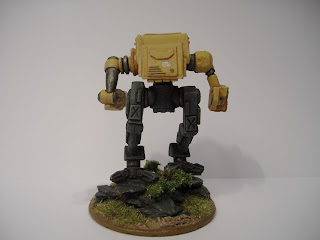 Back detail of the torso. I decided to put the Mech on top of some rocks to increase its height. For my opinion it was too tiny compared to other light Mechs i have in my collection. 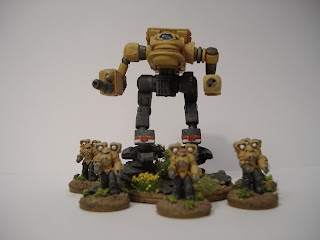 The Kit Fox A in comparison to the Elemental point I had finished recently.

Very sharp! there aren't very many "official" paint schemes i like, but this one has retained a military look...so i like it. you have done an exceptional job with the paint and base work which makes it that much better. nice work, my friend!

Just getting into Force on Force and have found your blog VERY inspirational. Keep up the great work!

Oh dear... the changes made to allow this to torso twist were not kind to the poor old Kit Fox.

However: yup, that's Beta Galaxy alright. I'd recognise it anywhere.