Welcome friends to what I hope will be a continuing series of articles about the subject of wargaming "moderns". I got many private messages and emails from people, who dealt with WW2 or historical gaming before (mostly ancients or middle ages) and from those, who obviously have played computer games or know movies about "modern" warfare. Most of them asked where they find a good start for getting into moderns. Well, the answer is rather easy - searching the internet, get in contact with others on forums such as "The Guild". But in this particular article I want to take a look at books on the subject.

The forthcoming new release of "Force On Force" and its supplements is under the flag of Osprey Publishing - the world's biggest publisher on books about military history and the history of warfare through the ages.

Of course Osprey has a series of books on the topics and conflicts, Force On Force is going to cover. Interesting about this is the fact, that some of the authors of these books are also writing the rules and scenarios you'll later find in your gaming resources. Let's take a look at what's out there - in this example I'll pick what I am personally interested in: Iraq and Afghanistan and the conflicts in those countries, as well as NATO involvement over there.

Osprey has many series of books - for wargaming "moderns" the most interesting ones however are "ELITE" series, "WARRIOR" series as well as "NEW VANGUARD" series and "ESSENTIAL HISTORY". I'll try to cover the others in the next volumes. Let's have a look at the "ELITE" series first: 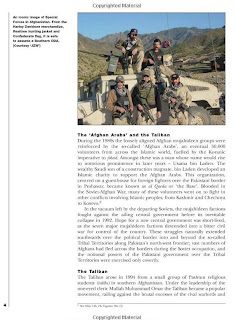 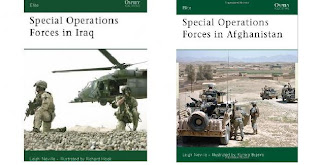 Both books seen above are written by Leigh Neville, an Australian intelligence specialist with excellent contacts with the US, UK and Australian special forces. Leigh is also writing for Force On Force and the forthcoming supplement called "Enduring Freedom" has large parts of his knowledge packed into some awesome scenarios to game! If you are looking for books on the topic of the rather silent and hidden ops that took place (and well continue to do so nowadays), the Osprey ELITE series "Special Operations Forces in Iraq" and "Special Operations Forces in Afghanistan" are top notch resources.

These books give you an insight in what took place and how missions were performed - it has a lot of potential to go deeper into the subject and find inspiration for many gaming sessions. Coloured images, drawings and tablets of gear and weapons should give the modeller and painter enough ideas on how to paint/convert their figures and vehicles accordingly. If you want to know how to set up a group of SOF soldiers for your games, this will give you an idea where and how to start.

In the next volume I'll write about the Osprey WARRIOR series - those cover the regular troops like the modern US Army or the USMC participating in the ongoing conflicts like those in the middle east.
Eingestellt von Chris M. aka "Sgt. Scream" um 10:56

so are your next work after the warriors going to irregular forces such as al-qaeda :D

Why? I have tons of them painted already....

Next work will be more tanks (Iraqi) and my USMC vs PLA project. :-)