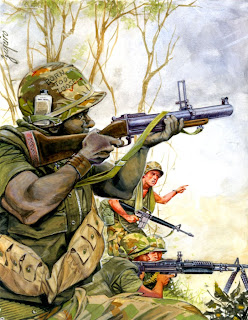 Gentlemen, Charly is somewhere out there.

Today it was announced that the supplement for Vietnam, which a lot of fans and gamers have had high hopes of re-release for, will be available in THIS year's October! While the first version of the book already had a 100+ fully coloured pages, the new release will be even bigger than that. And of course it comes with the expected Osprey quality and historical detail as well with stunning artwork and eye-candy above and beyond any other Vietnam rule set has offered before.

As Piers Brand (the author and Ambush Alley Games in-house painter and photographer) has put it:

"Can I just say that this book, compared to the original edition, is going to be something I suspect military historians interested in the period will purchase. Thanks to Joe Trevithick, my co-author on this one, we have quite possibly the first and complete, selection of T,O&Es for the period that collates around ten years of hard research work by Joe. This book will simply be a 'must have' for every Nam gamer. Its gonna be like no other. Add to that, 11 new scenarios, new rules in line with the new F-on-F edition and new pics and its gonna be something very special."

At this time it is available for pre-order through Amazon, but will also be through Osprey themselves, Ambush Alley Games themselves and bookdepository (uk).

Piers just gave me a list that I may provide for a preview of what sort of scenarios you can expect to get within Ambush Valley. Note that this is not final yet, there will be more than those!

That's good to hear. They're really a good supplement and deserve the 'Osprey Treatment'.

Looks to be an expensive year for books!