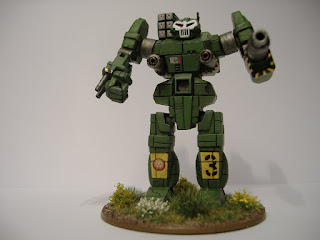 Towering over her enemies, this 6-piece resin kit was a limited quantity run of an Elfbait design I was able to obtain a little while ago.

This kit resembles the 95 ton Defiance Industries BNC-5S "Banshee" with its expanded capabilities. This is going to be the heaviest of all Davion Mechs my force will receive. 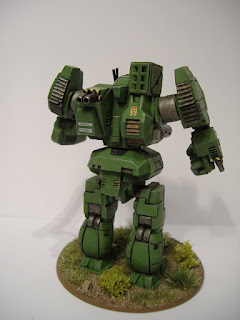 The back shows the fine sculpt with all of its heat venting louvres. The panels received a pin wash with thinned down black oil paint. Note the rear-mounted twin Defiance B3M Medium Lasers that should keep all sneaky enemies at bay. 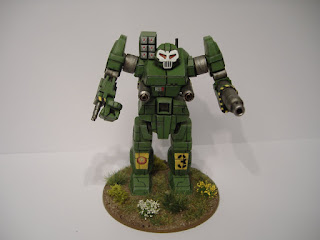 This front shot clearly shows why I spoke of "expanded" capabilities: The 5S variant has an increased arsenal of weapons it can bring to bear. A mix of missiles, energy-based weapons and a mighty Gauss rifle makes the "Banshee" a deadly opponent over various distances. 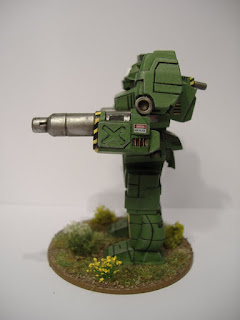 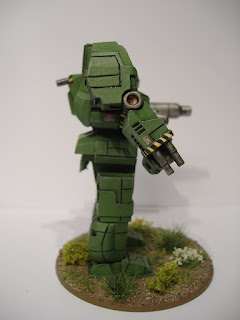 On the opposite: the battle-fist that will punch and rip about every opponent into pieces, combined with another twin-configuration of Defiance's B3M Medium Lasers. 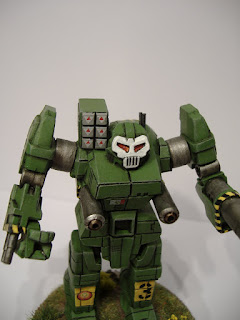 The head shows my attempt to paint the cockpit glass (eyes) just like on all other Davion Mechs. To the left you can see the shoulder-mounted TharHes Maxi SRM-6 Rack and to left and right, just over the hip, the two Defiance 1001 series Particle Projector Cannons.
Two Defiance B3S Small Lasers (center torso and head) give the Banshee ample back-up for the close fight.

Extremely nice paintjob! Being one of the first people to play Battletech back in the days here in Germany I just have to say, that I do not like the new look they have given to models. But that does not diminish your work the least!