The latest addition to my House Davion troops is an icon of the Classic Battletech universe and hence not to be missing in my force: the WHM-7M "Warhammer".

This miniature started its life as an 3" tall plastic toy/action figure for Exo Squad, where it is known as Destroid Tomahawk. I gave it a full repaint and a minor conversion (see below). 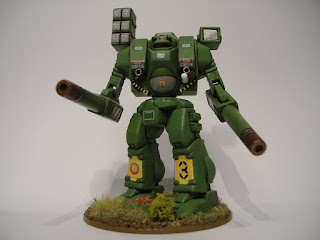 The front shot in a dynamic pose that every BattleTech fan will recognize immdiately. :-) 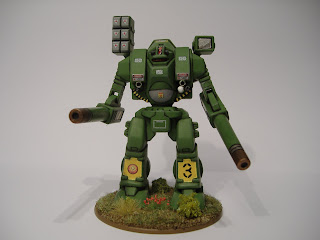 With a weight of 70 tons the Warhammer isn't the heaviest Mech of all times, nor is it on the upper end of the heavy class, but it is for sure a fearsome enemy. It stands taller than most other warmachines and its wide array of weapons left its mark on many battlefields. 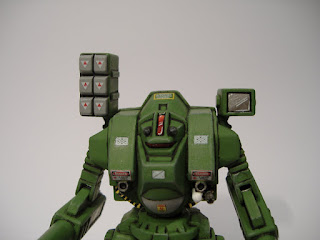 The detail shot of the upper torso reveals the shoulder mounted Shannon SRM-6 rack and the O/P 1500 ARB tracking system on the opposite side. Below, just over the hip the muzzles of the two Martell Medium Lasers. 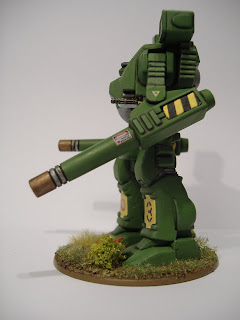 The left side arm-mounted Fusigon Longtooth Particle Projector Cannon has an extended range capacity. Visible above the PPC, mounted to the torso, you can see the gatling gun of the Anti Missile System. 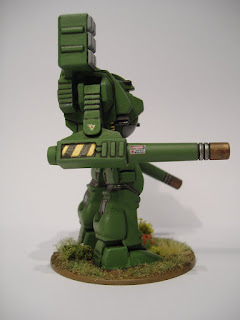 The other arm bears the same PPC, increasing the deadly firepower significantly. Above, on the torso, the 7M variant bears a Lindblad LFN Machine Gun which enhances the anti-infantry capabilities. 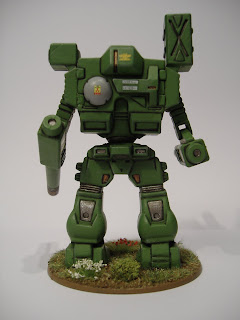 This back shot reveals the details of the Magna 280 engine and heat sink grilles. 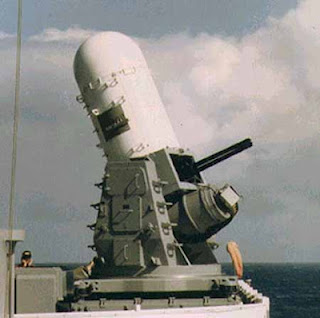 This pic shows a ship-mounted "Phalanx" gatling gun system. These are mounted on modern-day naval vessels to destroy incoming missiles before they hit the ship. My inspiration came from this pic to realize something similar on my Mech. The picture reveals torso details of the unpainted Exo Squad toy. As you can see it has two dome-shaped barrels to resemble the original 6R variant's two small lasers. I cut off the one marked with the red X and used the other as radar dome of the Anti-Missile-System. I bought 1/48 scale Minigun barrels made from resin that normally go onto an aircraft (AC 130 Spectre Gunship) and added on next to the "radar". See the results below: 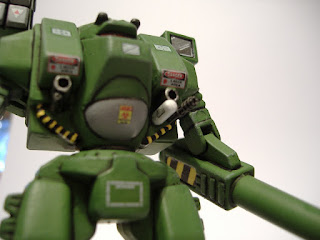 Note the torso mounted (right side of the pic) Lindblad Shotgun Anti-Missile-Sytem. The white dome resembles the radar and the minigun is my proxy for a rapid firing defense system that will destroy incoming missiles in mid air before they hit the Warhammer. Hope you like its look 'cause I think it looks awesome :-)
Eingestellt von Chris M. aka "Sgt. Scream" um 10:40

Very nicely done indeed. I have to say the Warhammer is my favorite Battletech Mech. I always seem to do well with it, no matter what the time period or how crap my pilot is.

Can we see some pics of the warhammer next to some 15mm Davion soldier proxies? I'm dying to see how the two look together.

Very nicely done!
I've got two Exo Squad Riflemen, that I've been meaning to paint up
this will help inspire my efforts!

Really well done, I had no idea the old Robotech Exo Squad toys would clean up that nicely.

@mech dude: its my third. I also painted a Longbow and a Rifleman that came from the 3inch action figures from Exo Squad. With some work (and my scheme isn't really complicated, I know, I know...) you get decent results.

Chris, this is exactly what I'd like to get into... Classic Battletech at this scale, specifically with the original "unseen" 12.

I guess it boils down to finding models at a realistic price. My biggest fear is worrying about the scale. Seems you may be mixing 1/200 and 1/144?

Online searches for Destroid, Robotech, Macross, Dougram, CrusherJoe etc start getting confusing. I sure want to avoid any purchasing missteps.

I too come from a long 40k background and was recently introduced to Force on Force.

Reading your disclaimer for FoF vs Battletech makes me want to find what you've written (homebrew rules?) Is there a Tag for that?

Anything you can help me with would be greatly appreciated. I will continue to read through your site.

Thank you for your time, Jon

@Jon: The scales do mix very well. It unfortunately depends on the kit maker which one to purchase is the correct one in scale.
Macross should be purchased in 1/200 scale OR 1/170 scale when available. The Exo Squad toys are a little large, but they are WAY BETTER in scale than the 1/200 Warhammer, Archer and Rifleman. Those to me look too small in 1/200.
Dougram should be purchased in 1/144 period. It doesn't matter if you buy diecast or plastic they are nearly same size. there is only two in 1/200 - thats Scorpion and Goliath. Those do work fine in 1/200. You can see they are available in 1/144 as well but my blog entry proves the Goliath to be HUGE (too huge to be honest). The Clan mechs are Ral Partha Europe "MUSEUMS SCALE". They mix well with Dougram, Exo Squad and Macross kits. All other stuff is garage kits that cannot be bought online if you don't know the guys that produce them (copyright etc).

My rules are in planning stages. They are not available yet and that's going to continue for a little longer like this. There is however a thread at the official AAG forums in which you can help contributing/testing.