Prodos hasn't released any other Colonial Marines as those included in core game (KS version and retail, as well as version 2.0 with single piece miniatures) so far. In the rulebook for "Unleashed" the Marines are given the option to field support squads. The options come straight from the 2001 PC game "Alien VS Predator 2".

These can either consist of M-90 Minigun or M-6B Rocket Launcher toting personnel. Since there is no appropriate miniatures for either of the options yet I had to kitbash a little.

With the Terminator Genisys Resistance boxed set I got myself 16 miniatures that aren't exactly Colonial Marines, but they got some nice poses and can easily be converted. I used two of the bodies and the missile launcher parts, put some green stuff in place to sculpt a more appropriate looking M3 Body Armor and placed a few plastic strips here and there to get the look I wanted. Then I did a head swap with some North Star Models LLC Colonial Marines.

The M-6B Rocket Launcher looks a little like a modern day FIM-92 Stinger MANPAD, so the parts from the Terminator Genisys Resistance boxed set were fitting nicely. 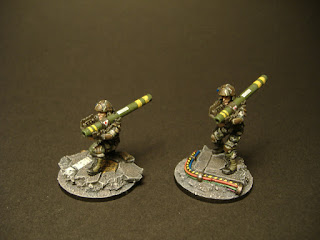 The base toppers are once again from Anvil Industries. I can't stress enough how superb there resin parts are! I use GW texture paint to blend the resin in with the base' surface. 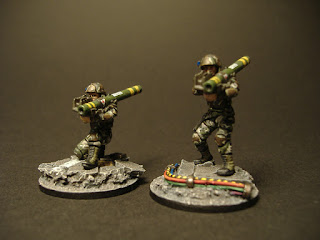 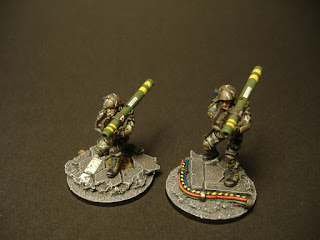 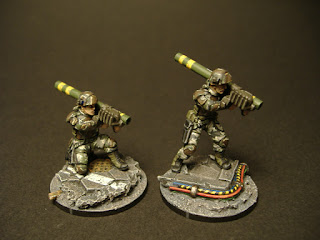 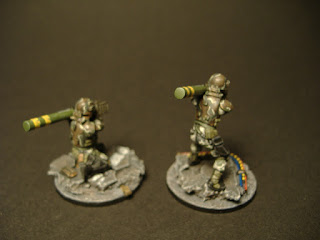 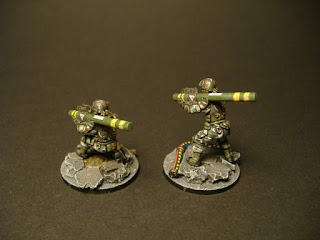 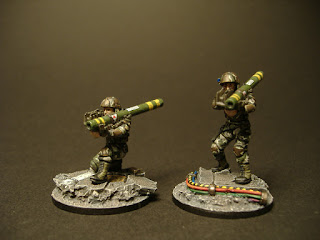 very cool how much of the fig if form Anvil Industries?

Only the resin bits on the bases.

So it seems to be that we're brothers in arms against all the f... mess from prodos...

I didn't know your blog until you come in my Temple (thank you very much : I'm very honored ^^). I walked along the different topics and not only I really like your paintjob, but also you speak about very different games ^^

Thanks, Mori. You've been an inspiration of mine since a long time.

Wow !! I'm very honored to read that answer of yours indeed !! Oo

Thank you very much,