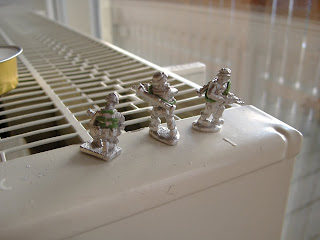 I bought AT-4 anti-tank missile launchers from RH Liberation Miniatures when I got my 20mm figures from them. Unfortunately none of their models in the whole range does carry one of these. In order to make troops carrying them over the shoulder I had to add the shoulder straps to the launcher tube. For doing so I bought Armypainter's green stuff. Really simple. Mix yellow and blue and when it turns green: sculpt it! The other miniature in the lower left corner is from Stonewall Figures Desert Fury - Baghdad to Karbul range. Sadly it's not up-to-date with its gear and has only a flak vest instead of body armour. I tried to represent the current armour with green stuff. Go easy on commenting my sculpting - like I pointed out it's the first time ever I used this Green Stuff putty. Oh and yes, of course I will remove the mould lines before painting these guys. :-)
Eingestellt von Chris M. aka "Sgt. Scream" um 17:53

I think you did fine.

I have been tempted myself to do this sort of thing but I am scared of my modelling ability, or lack of it. I am not very creative and find it really hard to visualise something before it exists or even translate it from an image.