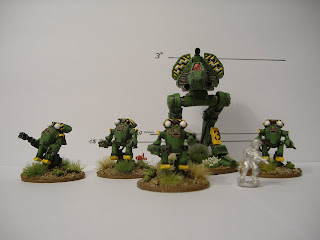 I was away for the weekend, but I managed to paint up the first squad of "Ravager" Assault Battle Armor and a 40 ton medium Mech "Targe" for House Davion's 3rd Crucis Lancers.
They aren't finished to be honest, as they still lack details - especially the "Federated Suns" decals, but I haven't ordered any yet so that got to wait. Once again I tossed in the 18mm Modern US Rifleman - just for scale. 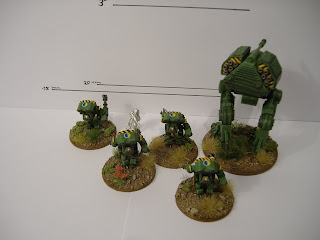 The view on top of the twin missile launchers shows squad marking ("C" for the leader, all others bear a "2" as I will add another team getting a "3"). The decals I found in a drawer, I think they came from a Leman Russ kit from 40k. I am especially proud of my warning! stickers that I painted on all ammo boxes for the Rotary Recoilless Rifles and my freehand hazard stripes (even in between the exhaust-piping of the MRM-10 of the "Targe" Mech!) 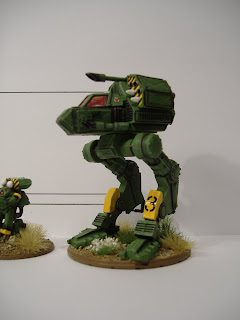 A close up on the modified "Targe" Mech. Note that I removed some of its missile warheads so it looks like they were just fired. Again, hazard stripes, all painted freehand, no decals used. I tried to make the muzzles of the Medium Lasers look like they are burnt stainless steel (hot exhaust looks that way), with paint chipping off due to the enormous heat of the laser beams. The ammo warning! triangle I cut off an old decal sheet of a Revell aircraft kit (behind the cockpit). 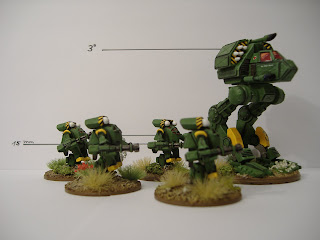 A view that reveals more detail of the Rotary Recoilless Rifles from the Battle Armor. 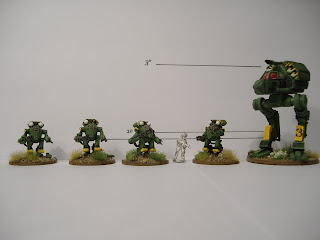 Another random shot, showing the scale once again. Correctly based, the old MW Dark Age minis work quite well with 15mm (considering the pewter miniature is 18mm and therefore on the large side anyway).
Eingestellt von Chris M. aka "Sgt. Scream" um 11:47

Great work on those.
I love the hazard lines and the "missing" missile on the 'mech.
Loving this project!

Mark,
Rebel Minis has shipped my infantry. We'll see if they are any smaller once they show up.