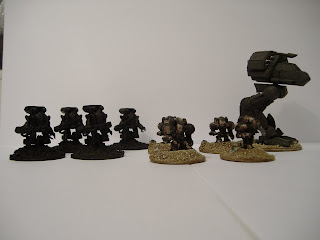 Some WIP pics taken quickly in between painting and watching the news. To the right the "Targe" for House Kurita in its first layer of paint for their camo pattern. Directly in front are some "Kanazuchi" Battle Armor troopers. These already show the finished 3-tone-pattern. They aren't finished completely though (details, badges, cockpit, weapons etc.), but I had to interrupt as the Devlan Mud wash is drying at the moment. To the far left is another squad of "Ravager" Armor for House Davion's 3rd Crucis Lancers. 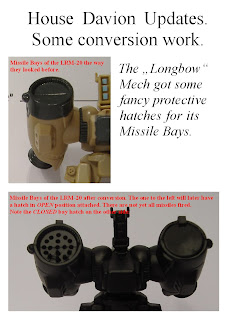 Well, click the picture as it's pretty much self-explanatory. I gave the missile bays some missiles and added hatches to the actual bays. 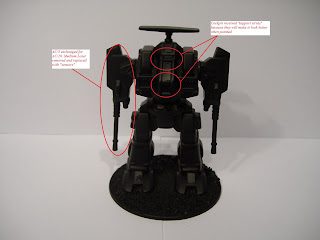 The Rifleman Mech got both arms' weapons cut off and replaced with single barrel guns. I wasn't sure what to do with the stumps of the former lasers, so I added "sensors/lenses". That will at least look better once painted.
The support struts will let the "jeweling" of the cockpit glass (a techniqué that makes the painted glass look like sunlight is reflected in it) look far better.
Eingestellt von Chris M. aka "Sgt. Scream" um 23:18