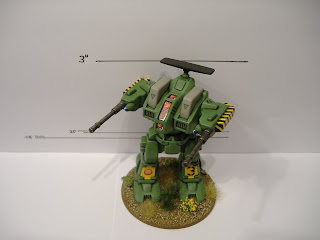 Another week of work has passed and I found enough time to paint up another Mech for Davion. This time the old action figure called "Raidar X" has been turned into a Battletech Mech, called "Rifleman". In one of my earlier posts, you could see it was modefied on its' arms and cockpit... 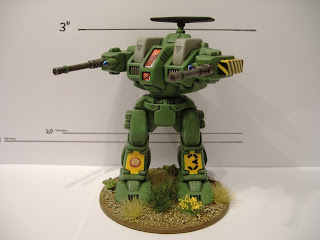 The huge windshield of the cockpit has been turned into one consisting of three parts rather than one. These make the "jewelling" look much better...On the leg you can now also spot a House Davion decal depicting the "Federated Suns" emblem. 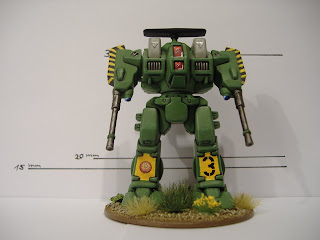 This frontside picture shows the modefied arms. While the original "Rifleman" has a heavy laser and an autocannon/5 in each arm, the House Davion variant "RFL-3C" shown in my conversion has an autocannon/10 in each arm instead and lacks the heavy lasers entirely. I used WH 40k machine guns as replacement barrels. 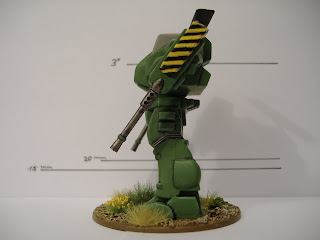 Once again I went crazy with hazard stripes. I need to clean them a bit, as I am not satisfied with the look at the moment. 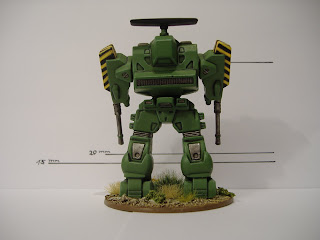 Nothing special to reveal on the backside of the Mech. But it's worth showing the detail of the miniature none-the-less :-)
Keep your comments coming, I really appreciate any input.
Eingestellt von Chris M. aka "Sgt. Scream" um 23:12

Excellent work! The painting is clean and the base is very well done. I'm going to buy a box of 1/72 scale figures today because of this site! There is good work here with every post-thank you.

I really dig the look of the Rifleman - you've done it proud.
(The less said about the battlefield performance of the 3025 variants, the better!)