I came up with some "Hot Spots" for Force On Force a little while ago. Obviously I never showed them in my blog for some reason. "Hot Spots" are little markers you place on your table according to scenario map and briefing. They are what you would call a "spawnpoint" in a computer game. Basicly that is exactly what they are - the Insurgent player gets reinforcements every turn which will show up on the map at a random location. These locations are called "Hot Spots" and there is up to five of them. The player of the regular forces can shut them down during gameplay, to decrease the amount of armed fighters he is going to face every turn. As there is up to five of these markers, I need to mark them accordingly. I was trying to find a way to display the "Hot Spots" on my table, like they are pieces of terrain that won't look out of place. Therefore I was adding subtle numbers - see the pictures: 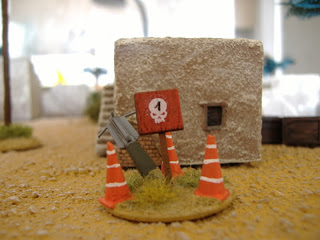 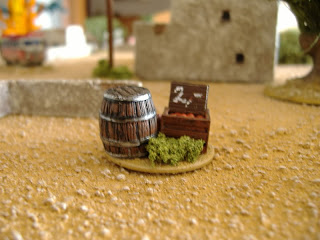 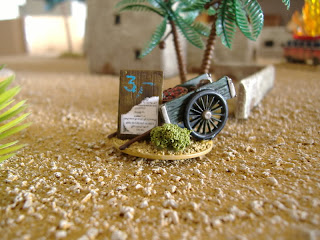 Hot Spot #3: Another random piece that could be placed in any backyard on the table. Again I used a sign showing a price to hide the "3". 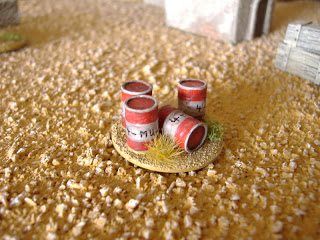 Hot Spot #4: This one is rather funny marker. It shall show the fourth of my markers. I thought it would be pretty hilarious to mix the word "formula" (a term used in a lot of engine oil commercials) with "mullah" (a word common in the middle east) - and ended up with "4-mulla oil"). 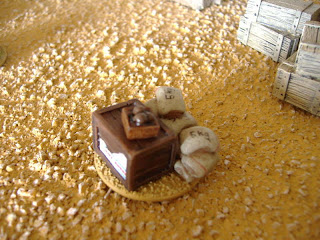 Hot Spot #5: This one can also be placed anywhere like a backyard, a market, even on a rooftop. The bags and the box are marked as being five kilograms of weight. Easy way to show a "5".
Eingestellt von Chris M. aka "Sgt. Scream" um 10:43

Ausgezeichnet! These are well done and should blend nicely with your terrain without looking like obvious hot spots. This is still something I need to work on in both 15mm and 20mm.

Excellent work Chris,much better than the basic numbered cards I use...:)

Thanks for your comments, guys.