Under Fire Miniatures releases for March 2011: 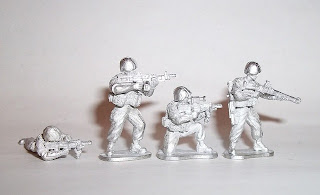 Pack 1 : A 'fighting' pack. Consists of prone rifleman, kneeling rifleman with night-site on his weapon, a standing/firing Minimi gunner and a man at ready about to fire a combat shotgun.

Pack 2 : An 'engineer' pack. This has a soldier using a Vallon mine detector, another using a wrecking bar for loop-holing purposes, a third carries an assault ladder, whilst the fourth test fires the XM25 25mm grenade launcher, currently on trials in Afghanistan.

Pack 3 : A 'command' pack. Has a bareheaded SNCO/officer type pointing and issuing an order, a light mortarman & 2 x radio operators, one with a Minimi.

Pack 4 : A crew served weapons pack. There's a 2 man medium mortar team, with mortar & a soldier firing a Javelin missile.
Najewitz Modellbaushop releases for March 2011:
Jens at Najewitz Modellbaushop has a new series of 20mm generic middle eastern buildings that can be used for Africa, Iraq and other settings. 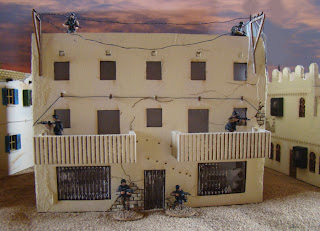 A modern House with shop.Supplied with air conditioners, power poles and satellite dishes 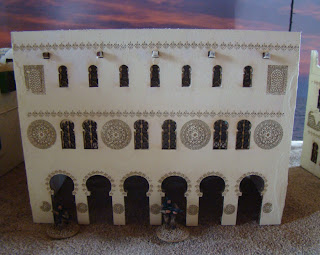 And another House in old style.
S&S releases for March 2011:
Shaun and Stewart have been busy once again and so we get another bunch of brand new vehicles this month. The Special Forces Quad Bikes were created with help from Brian. There are going to be various riders to man them. 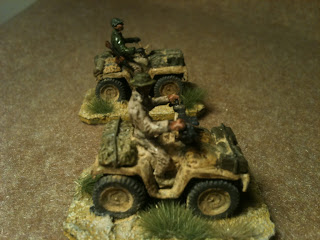 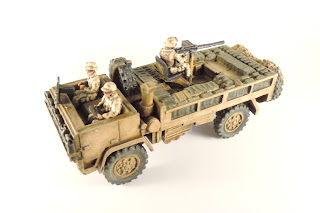 "War Pig" United States Special Forces vehicle.
Shaun said: "this has mostly moulded in stowage, but does have metal stowage that can be added or left off, the crew figs are from Elhiem, thanks to Matt for the license agreement, and to Simon Ford for badgering us both to do it. (...) the rear gun and seat are separate and again can be changed, the gun will be a .50cal HMG, but a 40mm Grenade Machine Gun or GPMG (General Purpose MG) option is available. Although you will not be able to buy them just yet, they will surely be ideal for those Ambush Alley games. My thanks to Mark Taylor for the paint job." 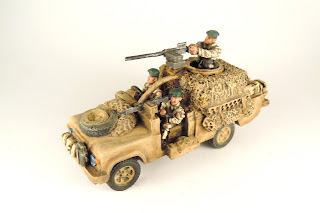 Land Rover WMIK of the British Special Forces.
Shaun said "...it has lots of metal stowage and will have 3 crew, you can choose between beret, helmet, floppy hat or spec ops crews. Main armament can be either .50cal HMG or 40mm Grenade Machine Gun."
Eingestellt von Chris M. aka "Sgt. Scream" um 23:30

These look very nice Chris. I esp like the Crew served pack and who can resist the landie.

Nice stuff and good information for old and new to 20mm modern.