Hi there, welcome to another volume of articles on gaming "moderns". This time I'd like to introduce the very handy series of Osprey Publishing's "WARRIOR" books. Like the last time I am going to concentrate on the conflicts I am personally interested in: the Middle East and Afghanistan. Please note, that Osprey has this series of books also about conflicts like Vietnam or the Arab-Israeli wars etc.!

Compared to the "Elite" series of books, the "Warrior" ones concentrate on line troops. The regular grunt, performing missions and fighting in the conflicts around the world.

When it comes down to paint miniatures for Force On Force, searching pictures for reference in the internet is a good thing. It has however one major drawback: you mostly never know what time and date the pic was taken. Given the gear of the US Marines and the US Army changed during the conflicts in Iraq and Afghanistan, their appearance changed dramatically, if you compare early deployments with later contingents being sent downrange. For example did the old desert 3-colour BDU (battle dress uniform) retire from service in exchange for the all new digital patterns of ACU (army combat uniform) and desert MarPat (Marine pattern).

In the last decade the US forces not only introduced new body armors, they also changed the camouflage pattern of their uniforms in all military branches. New style of helmets and sometimes even weapons were brought into service and field-tested in the ongoing conflicts. The Osprey Warrior series of books offers a large insight into the active military of the United States, with the books shown below focussing on appearance, mission, gear and training of the US Army in Baghdad in the years 2003-2004 and the USMC in Iraq during Operation Iraqi Freedom. 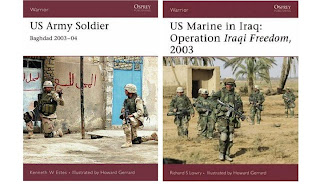 This example pic below shows only one of many fully coloured plates out of Osprey's Warrior series (this one is out of US Marine In Iraq). Pages like this do help not only to get a better understanding of the army you wish to collect for your games, it also is a irresistible source as painting guide. Did you for example know, that the US Marines ran around in woodland camo in the early days of the Iraq conflict, because they didn't get enough desert camouflage MOPP suits? Now if you want to collect an USMC army for the first battles of the invasion, this is a fact you should know, so you paint up accurate miniatures - these books will help you to do so. 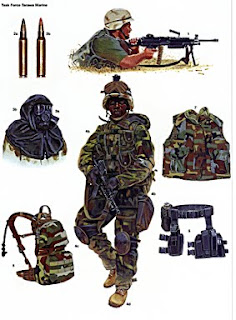 The books also offers those that didn't serve in the US military some detail on how basic training is performed, what ranks (and their correct abbreviations) the soldiers bear or what common infantry weapons were used in these operations.
You also should know that artwork such as this example is used in similar way in all forthcoming books for Ambush Alley Games' Force On Force - as a matter of fact, the very same artists do colour the forthcoming wargaming rules from Osprey.
Eingestellt von Chris M. aka "Sgt. Scream" um 12:40

Cracking blog.A hell of a lot of usefull info mate,