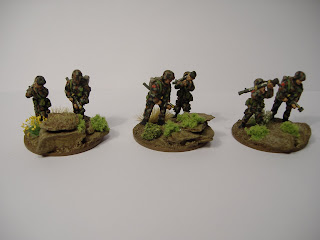 These shoulder launched QW-2 SAMs are the equivalent of the Russian IGLA or the US Stinger missiles. They are heat-seeking and a real threat to any aircraft or helicopter in low altitudes.
I used the appropriate miniatures from S&S and Elhiem West-Germans to resemble three such teams. 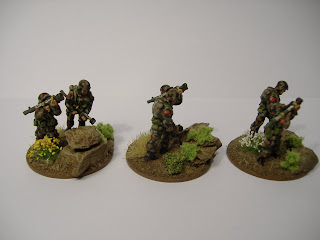 Bases are made from steel washers (30mm), some stones added and little bit of flock and foliage... 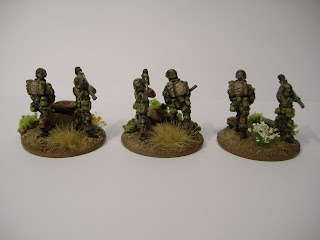 The Elhiem minis were converted. The Stinger missile had to be re-designed to bring it closer to the look of the S&S launcher the other miniatures are bearing. I like the fact that both miniatures are having different heights - like real humans, miniatures come in various sizes, too.
One holds a spare missile while his mate scans the sky for any incoming USMC helibourne invasion force to Skira.
Eingestellt von Chris M. aka "Sgt. Scream" um 10:10