"Contractors In Trouble" - a simple gaming table for starters

Some people wondered if they need a huge table to play Force On Force. The answer to that question is no.
I have only a two room apartment available and space to game in those is rather restricted. The authors of FoF had games in mind that can be fun yet challenging to play on a small board, too. Not having a dedicated room to game, my kitchen table is all I can use. And even there, space is limited. The table I do have however, allows me to play between 1m x 1m square or 1,50m x 1m for somewhat bigger types of engagements. I'd like to show you my table setup for the original Ambush Alley (Force On Force's predecessor) introduction scenario "Contractors in trouble". 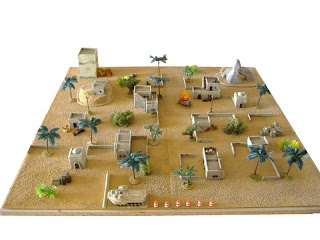 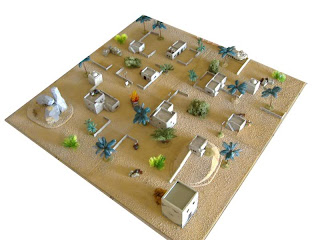 This side of the table is where the USMC player needs his two fire teams and the rescued civilians to leave (alive of course). 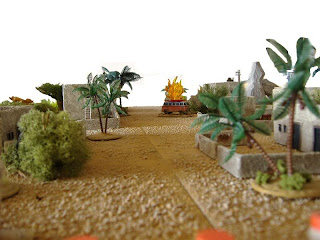 A shot down one of the tables' "Ambush Alleys". If you look close enough you can see where the 5 markers for hot spots I was showing earlier in another post are located. Now imagine hordes of mad Jihadists trying to stop your two fire teams of Marines doing their job. And it's getting worse every turn because of reinforcements to fight the infidels occuring all over the village's streets. Shall I lay down suppressive fire? Shall I try to storm the houses and clear those damn hot spots to stop reinforcements? Will the contractors survive long enough while being pinned down by heavy fire of the insurgents? Will I make it out of this alive with both teams? Can I afford losing men in a campaign to rescue contractors being stupid enough to get caught in the middle of Indian Country? So many questions that only your good tactics and leadership will be able to answer. Force On Force will challenge all of these skills. Do you have them, too?
The table I use is rather small but enough for such small scale operations. The houses are from Flames of War's Africa set. The palm trees are deco materiél I got off ebay, the moss is from Faller (H0 scale model railroad flock). Street Lights and telephone poles are H0 models. The desert boards and hills are from ESLO Germany.
Eingestellt von Chris M. aka "Sgt. Scream" um 00:39

Mmmm nice post. I am quite surprised to see that the FOW building fit in so well with the 1/72 scale vehicle.

To be exactly, Paul, the FOW buildings are on the large side for 15mm and only a tad too small for 20mm. Somewhere in between (18mm) is what they exactly are. But unless your figures are placed right in front of the doors, it's barely noticeable.