As I have promised, the third volume of my articles on "wargaming moderns" is all about the armored behemoth of the battlefield: tanks and military vehicles in general. Let's face it: infantry actions are fun and challenging, but if you really want to blow some things up in your tabletop games, you know you want to have a tank or at least an APC or vehicle of some sort in your army. On the market for the military enthusiast there are some great book titles to help you sort out your needs. Same goes for the plastic or resin kit modeller and of course for the tabletop gamer.

Most military vehicles tend to stay in service over decades, although there will be newer technologies implemented at some time during that period of service. Sometimes it's confusing when or where a certain variant of a vehicle was used. In other conflicts different variants (new and old) where used side by side in an army. Some vehicles only got new guns, others better armor or just some more high-tech sights and sensors. Other military vehicles recieved a totally new silhouette because of a re-design of turret or hull. So, how does the avarage gamer find out what he needs for a certain period in military history? Let's first have a look at Osprey Publishing's "New Vanguard" series of books. 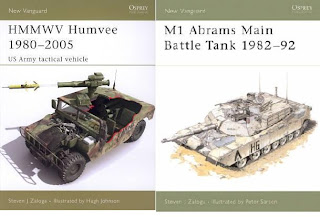 Osprey offers a huge amount (really! it is huge) of books in this series. Covering most vehicles ever used in an armed conflict. Be it WW2 stuff or the latest inventory like the US Army's Stryker wheeled vehicle. As you can see above there is books about the history, deployment and variants of the US HMMWV and ABRAMS tank for example, but also about Russian-built stuff like T-55 tanks or the British WARRIOR infantry fighting vehicle. Osprey not only offers books about the ground vehicles, they even have "New Vanguard" series books about helicopters - Hind or Cobra to name just two. Check out the huge list on their website! 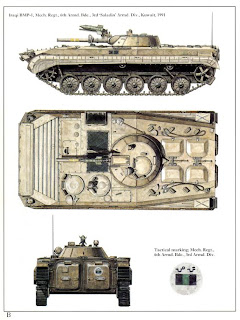 So, why did I invest in those books? Well, I have started to collect them - because they are some of the finest books on the market if you need to get details about armor, weapons and transport capacities etc. of such vehicles. This is important, as Force On Force (and most other games) represent such technical detail in their rules. Force On Force allows you to create your own stats for vehicles, but also comes with a representative list of most of the common military vehicles used by the most important countries. If you don't find the variant you want to use in your scenario, "New Vanguard" will help you to construct balanced yet realistic stats.
If you want to find high quality pictures for conversions into certain variants of your miniature tanks, the books give you an insight un-challenged on the market. They also cover the full history of developement, a series of articles about their use in conflicts (past and ongoing), their battlefield performances against different opponents and many fully coloured plates to reveal full detail about them. Especially the coloured drawings are of interest for gamers and painters, as they do show a lot of interesting camouflage options, tactical markings and other stuff close-up. The picture above is an example out of the book about the Russian BMP vehicle. (It comes handy for my collection, as the Iraqis I currently build a force for have used them a lot).
Another book I recently got my hands on is from Concord Publishing's "Mini Color Series". It doesn't have any developement history, it doesn't compare the abilities with other opponent vehicles, nor does it have the nice colour plates of the Osprey books. So, what does it have? 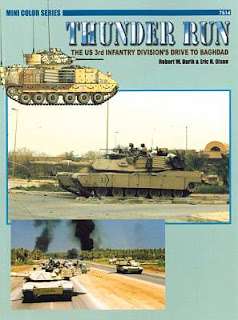 What made it interesting for me was the gigantic amount of colour pictures directly from the frontlines of the famous "Thunder Runs" of the armord units of 3rd ID. I was building (actually I still am) lots of US Army vehicles (where Osprey's books came in handy) and was looking for a way to make them look like 3rd ID's tanks during the invasion into Iraq 2003. They were looking a bit like gipsy (please, no offence) waggons. Covered with gear, rucksacks, tents, water tanks, jerry cans etc. I was trying to achieve the same look on my 20mm vehicles. The internet did give me some idea but defenitily not enough. Concords' book was able to show me what I needed to know. So, if you are considering realistic vehicles for a setting in Iraq during the early stages of the conflict 2003-2004, I recommend to look for this book, too.
Eingestellt von Chris M. aka "Sgt. Scream" um 23:11

Thank you for this series! It is helping me tremendously. Please keep giving any advice you can think of to help those of us who do not understand the modern military. I have always been a WWII guy.

Got the 2 Osprey in first picture. Damn you... and others from FLGS and osprey online shop... for a total of a dozen magazines !