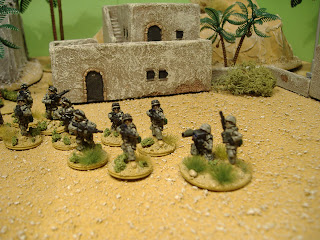 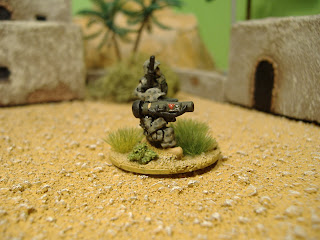 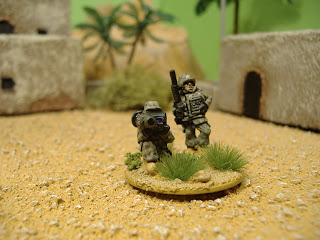 My latest US Army weapons team consists of a FGM-148 Javelin gunner and his assistant.
The FGM-148 is a state-of-the-art "fire and forget" guided anti-tank missile. It is able to penetrate almost all modern armour and has the ability to strike the target from the top (most AFV have weak armour on the top).
It's also in wide use for asymetric warfare as the launcher unit has strong thermal night vision, being a good tool for recon at night in overwatch positions. Allied forces are also able to pound enemy strongpoints with high accuracy from a safe distance.
The figures are both from RH Liberation and based simply on a 40mm diameter washer.
Eingestellt von Chris M. aka "Sgt. Scream" um 20:42